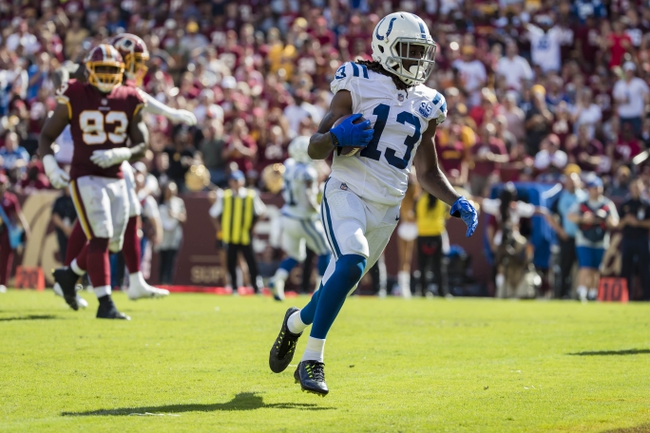 The Indianapolis Colts and the Philadelphia Eagles meet in week 3 NFL action from Lincoln Financial Field on Sunday afternoon.

The Indianapolis Colts will look to build on their first win of the season, coming in the form of a 21-9 win over Washington in their last outing. Andrew Luck has completed 71.4 % of his 84 pass attempts for 498 yards, 4 touchdowns and 3 interceptions while Jordan Wilkins leads the Colts in rushing with 101 yards on 24 carries. T.Y. Hilton leads Indy with 12 catches for 129 yards and 2 touchdowns while Ryan Grant has 10 catches and Eric Ebron has a pair of TD grabs. Darius Leonard leads the Colts with 21 tackles while Margus Hunt has a pair of sacks on the year. Through their first two games, Indianapolis is averaging 330.5 yards of total offense and 22 points per game this season.

The Philadelphia Eagles will be looking to bounce back from their first loss of the season, coming in the form of a 27-21 loss to Tampa Bay in their last outing. Nick Foles has thrown for 451 yards in completing 65.9% of his 82 pass attempts, but Carson Wentz is expected to make his season debut in this game. Jay Ajayi has rushed for 85 yards and 3 touchdowns this season while Zach Ertz leads the Eagles with 142 yards and Nelson Agholor logged 121 receiving yards with each racking up 16 catches this season. Ronald Darby leads the Eagles with 13 tackles while Fletcher Cox leads Philly with a pair of sacks this season. Through the first two games, Philadelphia is averaging 322 yards of total offense and 19.5 points per game while owning the stoutest rush defence in the league, allowing just 58.5 rushing yards per game this season.

You could very well argue that the Eagles should be 0-2 this season, if it wasn’t for Atlanta performing so poorly in the season opener. Wentz may bring some life to the Eagles’ offense, but you have to wonder if there’s going to be some rust that needs to be shaken off. I wasn’t high on the Colts last week, but they proved me wrong and appear to have worked out the kinks and have Luck firing on all cylinders again. I think Luck can do enough to keep Indianapolis within a couple of field goals at worst, so I’ll take a shot with Indianapolis and the points here.