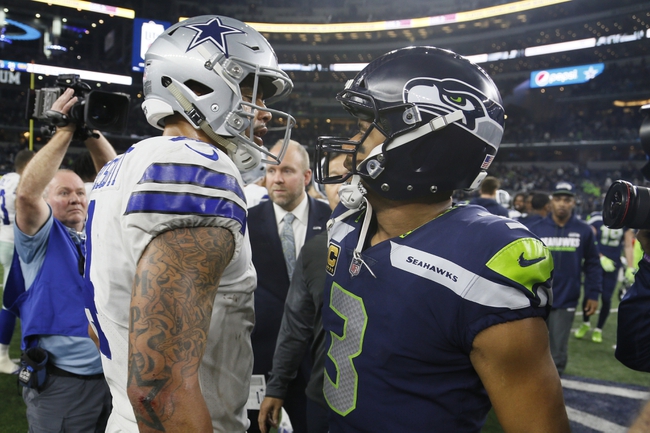 The Dallas Cowboys and the Seattle Seahawks will meet up at CenturyLink Field in Week 3 NFL action on Sunday, September 23.

The Cowboys enter this game with a 1-1 record so far. Dallas fell in a limp effort against the Panthers 16-8 in Week 1, then followed that up with a nice divisional win over the Giants 20-13 this past Sunday.

In the Giants win, Cowboys QB Dak Prescott logged 160 yards and a TD, while Ezekiel Elliott managed 17 carries for 78 yards and a score. Tavon Austin was the top Dallas receiver with 79 yards and a TD off two grabs.

Over on the Seahawks’ side, they’re sitting at 0-2 so far. Seattle kicked things off in Week 1 with a 27-24 loss to the Broncos, then on “Monday Night Football” in Week 2 the Seahawks were flummoxed by the Bears defense on the way to a 24-17 loss that wasn't as close as the final score indicated.

In the Monday night Bears game, Seattle QB Russell Wilson finished with 226 yards, two touchdowns and a pick, while Tyler Lockett led the receivers on 60 yards and a TD from five catches. Rashaad Penny was the top Seahawks rusher with 10 carries for 30 yards.

The Cowboys looked like they’d be in for a long season in Week 1, as they couldn’t get much going offensively. Week 2 was better for Dallas, as that game wasn’t as close as the final score would indicate. It will be a tough test for the Cowboys to go into Seattle and take away a win, and I’m not convinced they have the all-around offensive talent to do so. I’ll go with the Seahawks.