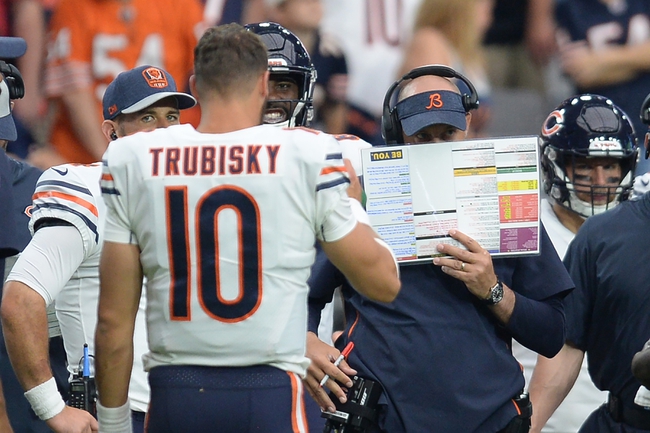 The Chicago Bears have a chance to win three straight games for the first time since the beginning of the 2013 season. The Chicago Bears have split their last six home games. Mitchell Trubisky is completing 69.2 percent of his passes for 591 yards, two touchdowns and three interceptions. Trubisky has one or less touchdown passes in 10 of his last 11 games. Allen Robinson and Trey Burton have combined for 284 receiving yards and one touchdown while Taylor Gabriel has 15 receptions. The Chicago Bears ground game is averaging 115.7 yards per contest, and Jordan Howard leads the way with 178 yards and one touchdown. Defensively, Chicago is allowing 20.5 points and 323 yards per game. Danny Trevathan leads the Chicago Bears with 20 tackles, Khalil Mack has four sacks and Prince Amukamara has one interception.

The Tampa Bay Buccaneers have been shaky at best defensively this season, and that's putting a lot of pressure on Fitzpatrick to play at a level he's not used to playing. While it makes for a fun story, there's a reason Fitzpatrick has bounced around from team to team throughout his career. Only the Kansas City Chiefs are allowing more yards per game than the Buccaneers, and it's tough to win trading punches like that each week. The Chicago Bears aren't pretty offensively, but they're proving to be elite defensively and continue to get relentless pressure on the quarterback. With Tampa Bay dropping back and throwing deep passes all day, that's not going to fly against this Bears front seven. This is going to be one of those games where Fitzpatrick probably looks like old Fitzpatrick. I'll lay the small chalk with the Bears at home.