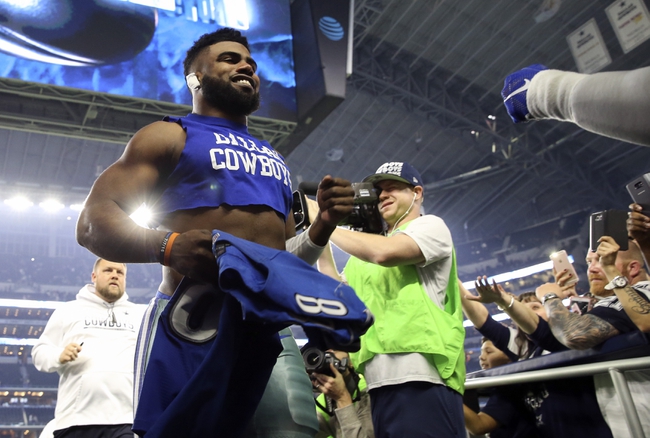 The Detroit Lions and the Dallas Cowboys meet in week 4 NFL action from AT&T Stadium on Sunday afternoon.

The Detroit Lions will be looking to build on their first win of the season coming in the form of a 26-10 win over New England last time out. Matt Stafford has thrown for 895 yards, 6 touchdowns and 5 interceptions on 65.2% passing while Kerryon Johnson leads the Lions with 161 rushing yards this season. Golden Tate leads the Lions with 20 catches for 257 yards while Kenny Golladay is right behind with 256 yards and 19 catches with a pair of receiving touchdowns. Defensively, Jarrad Davis leads the Lions with 12 tackles along with a pair of sacks while Devon Kennard and Eli Harold each have three sacks. As a team, the Lions are averaging 393.3 yards of total offense per game and 294.7 yards through the air in addition to 23.3 points per game this season. Defensively, the Lions own the 7th-tightest defense in the NFL with 301.3 yards against per game and the stingiest defence against the pass, giving up just 152 passing yards per game.

The Dallas Cowboys will be looking to get back to .500 after falling to 1-2 with a 24-13 loss to Seattle in their last outing. Dak Prescott has thrown for 498 yards in completing 61.4% of his 88 pass attempts with 2 touchdowns and 2 interceptions. Ezekiel Elliott leads the Cowboys with 274 rushing yards and a pair of touchdowns while Cole Beasley has a team-high 12 catches for 132 yards and Tavon Austin has a pair of receiving touchdowns. Leighton Vander Esch leads the Cowboys defense with 18 tackles while Demarcus Lawrence has a team-high 2.5 sacks this season. As a team, the Cowboys are averaging 277.7 yards of total offense per game to go along with 13.7 points per game. Defensively the Cowboys are tough once again, allowing the 3rd-fewest total yards against this season with 281 yards per game, including the 4th-fewest passing yards with 182.7 and sitting 7th in the NFL with 17.7 points against per game this season.

If we’re being honest, I’m not sure why the Cowboys are the favorite here. Sure Dallas is at home, but the Lions just got their first win of the season over the defending AFC champions. The Cowboys were manhandled by a Seattle team that hadn’t had much of an identity before last week, so laying points with them isn’t something I feel like doing here so I’ll take my free field goal with Detroit here.