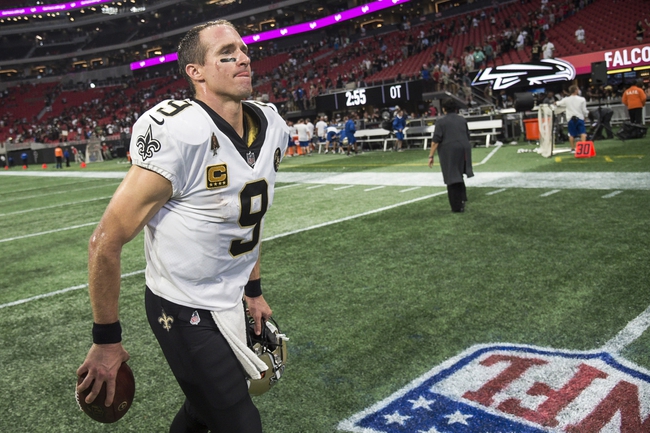 The New Orleans Saints and the New York Giants meet in week 4 NFL action from MetLife Stadium on Sunday afternoon.

The New Orleans Saints will look to build some momentum after making it back-to-back victories with a 43-37 win over Atlanta in overtime last time out. Drew Brees has thrown for 1,078 yards in completing 80.6% of his 129 pass attempts with 8 touchdowns and no interceptions. Alvin Kamara has racked up a team-high 141 rushing yards and 2 touchdowns on the ground while Michael Thomas has a team-high 38 catches for 398 yards and 3 touchdowns while the aforementioned Kamara has 30 catches out of the backfield for 298 yards. On defense, Cameron Jordan leads the Saints with 4 sacks while Demario Davis and Marcus Williams are tied for the team-lead with 13 tackles this season. As a team, New Orleans is in the top-5 in the NFL with 428 yards of total offense per game, 345.3 yards through the air and 34.7 points per game. The Saints are also very good against the run on defense, giving up just the 6th-fewest rushing yards per game at 84.3 per contest this season.

The New York Giants will be looking to build on their first win of the season to get back to .500 after a 27-22 triumph over Houston in their last outing. Eli Manning has thrown for 800 yards on 81 of 110 passing this season, with 3 touchdowns and 1 interception. Saquon Barkley has 216 yards rushing and 2 touchdowns while Odell Beckham Jr. has a team-high 24 catches for 271 yards. On D, the Giants have 3 different players with 1 sack while Curtis Riley and Janoris Jenkins lead the G-Men with 13 tackles this season. As a team, New York is averaging 319.3 yards of total offense and 18.3 points per game this season.

New York getting their first win of the year was a nice confidence boost, but it came over a still-winless Texans squad, and now the Giants have to try to keep up offensively the the Saints and I just don’t see that happening. The Saints have too many weapons and have to be riding a wave of confidence after their rally to come back and beat Atlanta in their last outing. All in all this is a reasonable line all things considered, so I’ll lay the points with the Saints in this spot.