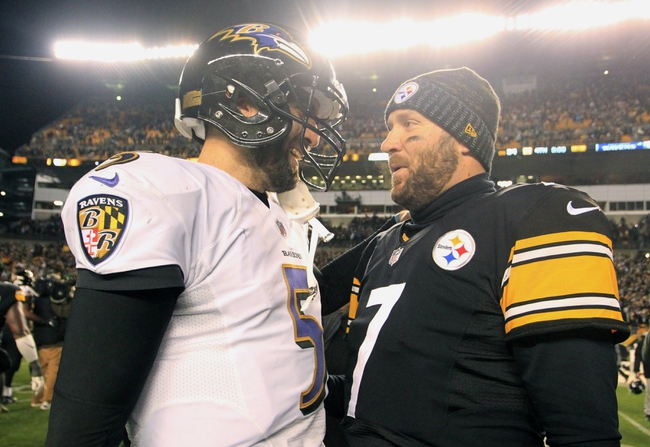 The Baltimore Ravens and the Pittsburgh Steelers will meet up in a divisional NFL showdown Sunday night at Heinz Field.

The Ravens are 2-1 so far this year. Baltimore started out with a 47-3 drubbing of the Bills, then fell to the Bengals 34-23 before bouncing back in their last outing versus the Broncos 27-14 this past Sunday.

In that Denver game, Ravens QB Joe Flacco managed 277 yards and a score, and Alex Collins was the top rusher with 68 yards and a TD. Leading the receivers for Baltimore was John Brown, with 86 yards on five catches.

Over on the Steelers’ side, they’re currently 1-1-1 on the young season. Pittsburgh tied a plucky Cleveland team in the opener, then were edged out by the Chiefs 42-37 in Week 2. Pittsburgh very nearly blew a 20-point lead in their game against the Bucs Monday, but eked out a 30-27 win.

Steelers QB Ben Roethlisberger tossed for 353 yards, three scores and a pick in the Tampa game, while James Conner put up 61 yards to lead the rush. JuJu Smith-Schuster was the top Steelers receiver on 116 yards from nine grabs.

Baltimore has started things out a little better than what I thought they might, and even though they’ve beaten a couple of “blah” teams the 2-1 mark is what’s important in what should be a tight divisional race.

This game may have big potential implications down the line as the season progresses, and the Steelers shouldn't be penciled in for anything these days due to their many issues. I’m going to go ahead and take the Ravens in what should be a very hard-hitting and intense game as usual.

The pick in this article is the opinion of the writer, not a Sports Chat Place site consensus.
Previous Pick
Los Angeles Chargers vs. San Francisco 49ers - 9/30/18 NFL Pick, Odds, and Prediction
Next Pick
NFL Podcast: Week 4 2018 NFL Free Picks