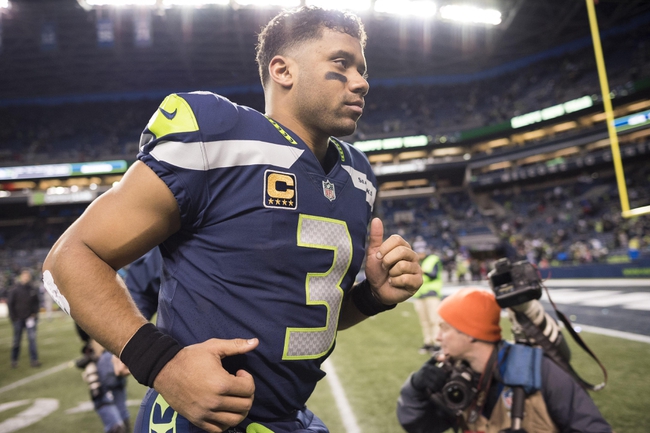 The Seattle Seahawks and the Arizona Cardinals meet in a week 4 NFC West division battle from State Farm Stadium on Sunday afternoon.

The Seattle Seahawks will look to get back to .500 after improving to 1-2 on the year with their first win, a 24-13 win over Dallas in their last outing. Russell Wilson leads the Seahawks with 716 passing yards on 57 of 95 passing with 7 touchdowns and 3 interceptions. Chris Carson leads Seattle in rushing with 177 yards while Tyler Lockett leads Seattle’s receiving corps with 12 catches for 196 yards and 3 touchdowns this season. On defense, Frank Clark leads Seattle with 3 sacks while Earl Thomas has a team-high 3 interceptions and Bradley McDougald has a pair of picks with a Seattle-high 17 tackles this season. As a team, Seattle is averaging 292.3 yards of total offense and 21.7 points per game this season while owning the 8th-fewest passing yards against this season, giving up just 215.3 yards through the air after week 3.

The Arizona Cardinals will be looking to pick up their first win of the season, currently sitting at 0-3 following a 16-14 loss to the Chicago Bears in their last outing. Sam Bradford leads the Cardinals with 400 passing yards, 2 touchdowns and 4 interceptions, but it was announced that 2018 first round pick QB Josh Rosen would get the start in this one. David Johnson leads the Cards with 116 yards on the ground while Christian Kirk has a team-high 122 receiving yards while sharing the team reception lead with Larry Fitzgerald as both have 12 catches this season. Defensively, three different Cardinals have two sacks, with Budda Baker and Antoine Bethea tied for the team-high with 20 tackles this season. As a team, Arizona sits dead last in the NFL with 190.3 total yards per game, 132 passing yards, 58.3 rushing yards and just 6.7 points per game this season.

A home dog is usually tempting, but the Cardinals have been god awful to start the season and it’s not like home field has helped much between these two teams as Seattle has done very well ATS in Arizona. What also won’t help is tossing Rosen in the deep end against a solid Seahawks defense that’s top-10 against the pass this season. Seattle hasn’t been great, but they at least have enough going for them including a stud QB in Russell Wilson that should be able to help the Seahawks get back to .500 so I’ll lay the points with Seattle as I see the Seahawks winning this one by at least a touchdown.