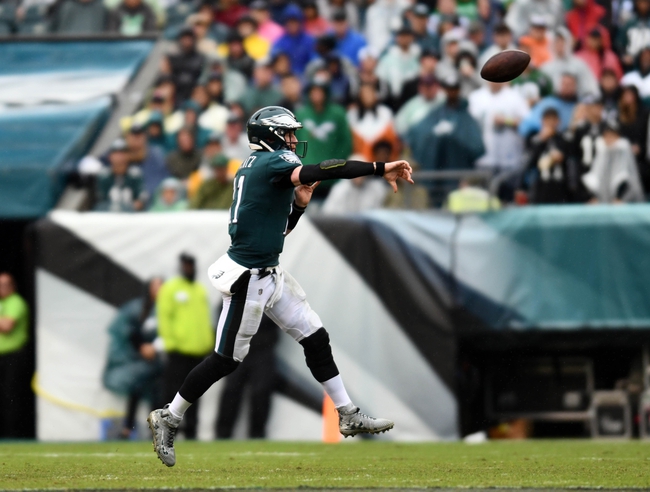 The Philadelphia Eagles and the Tennessee Titans meet in week 4 NFL action from Nissan Stadium in Nashville, Tennessee on Sunday afternoon.

The Philadelphia Eagles will look to build on a 20-16 victory over the Indianapolis Colts that propelled the defending champs to 2-1 this season. Carson Went threw for 255 yards, a touchdown and an interception in his debut, while Corey Clement leads the Eagles with 112 rushing yards and Jay Ajayi has 3 rushing touchdowns this season. Zach Ertz leads the Eagles with 21 catches for 215 yards while Nelson Agholor is right behind with 20 receptions for 145 yards on the year. Defensively, Fletcher Cox leads the Eagles with 2.5 sacks while Jordan Hicks has 1.5 sacks and a team-leading 19 tackles on the year. As a team, the Eagles are averaging just 341 yards of total offense and 19.7 points per game this season while allowing the fewest rushing yards per game in the league with 61.7 yards per game against on the ground through 3 weeks this season.

The Tennessee Titans will also be looking to improve on their 2-1 record after a 9-6 win over the Jacksonville Jaguars last time out. Marcus Mariota stepped in for an injured Blaine Gabbert and led the Titans on three scoring drives which was enough to seal the victory. Dion Lewis leads the Titans with 143 rushing yards while Derrick Henry has 139 rushing yards on a team-high 46 carries. Corey Davis leads the Titans receiving corps with 13 catches for 151 yards this season. On defense, Jurrell Casey leads the Titans with 3 sacks while Wesley Woodyard leads Tennessee with 22 tackles on the year. As a team, Tennessee is averaging 284 yards of total offense and 16.3 points per game while defensively, allowing 337 yards of total offense and 16.7 points against, the 4th-lowest mark in the NFL.

I’m the first to rag on the Eagles as I thought they should’ve started 0-2, but there’s no denying that this feels like a different team with Wentz under center. Who knows who will start for Tennessee at quarterback, and it’s either going to be a banged up less than 100% Marcus Mariota, or Blaine Gabbert who I still don’t trust as a starting QB. Either way, Went is the better option against both, and should be able to lead Philly to another win, covering the spread on the road in the process.