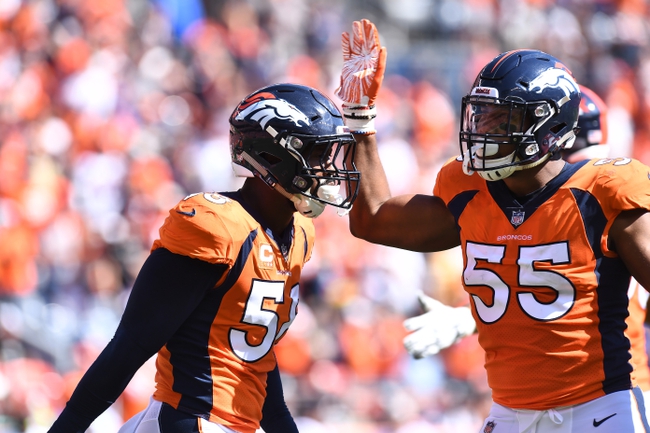 The Denver Broncos look for their third home win of the season to keep pace in the competitive AFC West. The Denver Broncos have split their last eight home games. Case Keenum is completing 61.1 percent of his passes for 743 yards, three touchdowns and five interceptions. Keenum has two or more touchdown passes in four of his last five games. Emmanuel Sanders and Demaryius Thomas have combined for 413 receiving yards and two touchdowns while Courtland Sutton has five receptions. The Denver Broncos ground game is averaging 144.7 yards per contest, and Phillip Lindsay leads the way with 198 yards on 33 carries. Defensively, Denver is allowing 23.3 points and 340.3 yards per game. Todd Davis leads the Denver Broncos with 21 tackles, Von Miller has four sacks and Justin Simmons has one interception.

The Kansas City Chiefs look like the most unstoppable team in the league three weeks into things, as they've scored at least 38 points in all three games. Mahomes looks like the MVP frontrunner and the production is sustainable with all the weapons he has. The Denver Broncos haven't scored 30 or more points since September 17 of last year, which means they've gone 17 straight regular season games without reaching that total. While the Broncos pass rush gives them a chance to hang around, the home team needs to score points to have a chance here. The Kansas City Chiefs have covered 10 of their last 17 games when favored by at least three points. The Denver Broncos have failed to cover each of their last eight games when an underdog of at least three points. I'm simply not trying to step in front of the Chiefs right now, as the chemistry and momentum is too strong. I'll eat the road chalk.

The pick in this article is the opinion of the writer, not a Sports Chat Place site consensus.
Previous Pick
Atlanta Falcons vs. Cincinnati Bengals - 9/30/18 NFL Pick, Odds, and Prediction
Next Pick
NFL Picks and NFL Odds Podcast Week 5 2018: A First Look at NFL Odds for Week 5 2018