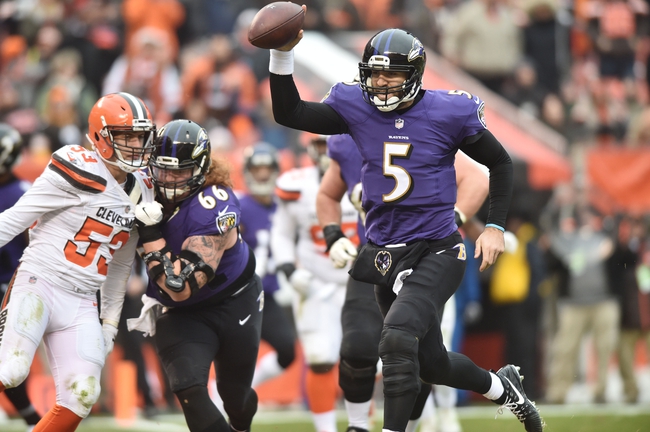 The Baltimore Ravens and the Cleveland Browns square off in week 5 NFL action from FirstEnergy Stadium on Sunday afternoon.

The Baltimore Ravens will look to build on back-to-back wins that have them sitting at 3-1 following a 26-14 win over Pittsburgh in their last outing. Joe Flacco has thrown for 1,252 yards, 8 touchdowns and 2 interceptions in completing 64.3% of his pass attempts while Alex Collins leads the Ravens in rushing with 158 yards and 2 touchdowns and Javorius Allen has a team-high 3 rushing scores. John Brown leads Baltimore’s receiving corps with 338 yards and 3 touchdowns while Willie Snead IV and Michael Crabtree each have a team-high 18 receptions this season. Defensively, Terrell Suggs leads the Ravens with 2.5 sacks, while Tony Jefferson and Kenny Young share the Ravens’ team lead in tackles with 17 apiece. As a team, Baltimore is averaging 396.8 yards of total offense to go along with the8th-most passing yards in the league with 307.8 per game and the 5th-most points per game with 30.8 through 4 games this season. The Ravens are also tight defensively, sitting top-5 in total yardage against, passing yardage against, rushing yards against and scoring defense this season.

The Cleveland Browns will look to bounce back after a 45-42 overtime loss to the Oakland Raiders in their last outing to fall to 1-2-1 this season. Baker Mayfield leads the Browns with 496 yards, 2 touchdowns and 2 interceptions in completing 59.4% of his 64 pass attempts. Carlos Hyde has rushed for 285 yards and 5 touchdowns while Jarvis Landry leads Cleveland with 24 catches for 312 yards. Defensively, Myles Garrett leads the Browns with 4.5 sacks and Damarious Randall and Denzel Ward each have two interceptions while Terrance Mitchell leads the Browns with 18 tackles this season. As a team, Cleveland is averaging 366 yards of total offense per game, including the 2nd-most passing yards per game with 152.8 along with 25.5 points per game this season.

I really wanted to give the Browns a shot in this one, as playing at home is one of their strengths and the field in Oakland had something to do with their loss. The problem is, the field wasn’t responsible for the Raiders hanging 45 on the Browns, and the Ravens look like the defensive power we’ve become accustomed to seeing over the years. Add in the fact that the Ravens have won each of the last 5 meetings by more than a field goal, and I think you have to back Baltimore to get the job done once again.