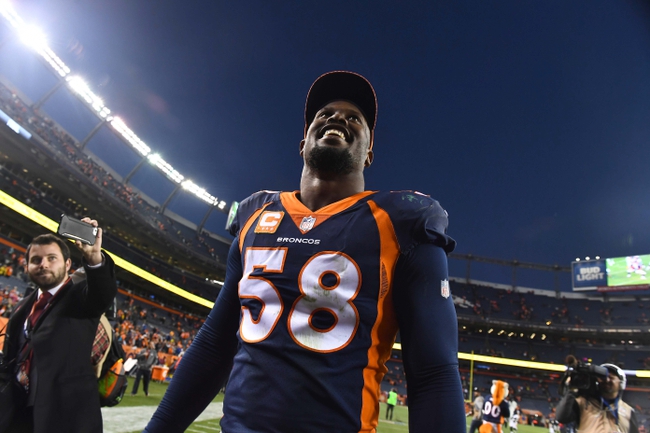 The Denver Broncos and the New York Jets meet in week 5 NFL action from MetLife Stadium on Sunday afternoon.

The Denver Broncos will look to bounce back after back-to-back losses dropped Denver back to .500 at 2-2 following their 27-23 loss to Kansas City in their last outing. Case Keenum has thrown for 988 yards, 3 touchdowns and 6 interceptions in completing 61.7% of his pass attempts this season while Phillip Lindsay leads Denver with 267 rushing yards and Royce Freeman has 219 yards and 3 touchdowns. Emmanuel Sanders leads Denver’s receiving corps with 24 catches for 314 yards while Demaryius Thomas has 20 receptions this season. Defensively, Von Miller has 4 sacks while Justin Simmons leads the Broncos with 23 tackles this season. As a team, Denver is averaging 383.2 yards of total offense per game, including 148.2 yards of rushing offense and 21 points per game this season.

I’ve always said the Broncos’ defense is good enough that it always gives them a chance to win a football game, and that came back to bite me the last two weeks. However, Kansas City is special to start the year once again and Baltimore is a solid team in the NFC North. And while the Broncos are 0-3 ATS this season, the team isn’t that bad to be giving up points to the Jets here, even if Denver is on the road. Darnold is doing his best, but the Jets are starting to look like the same frustrating team that we’ve seen struggle over the years and I’m having a hard time imagining a rookie like Darnold figuring out one of the NFL’s best defensive units. I just think the wrong team is favoured here, so I’ll take the free point with Denver in a game I think the Broncos win easily.