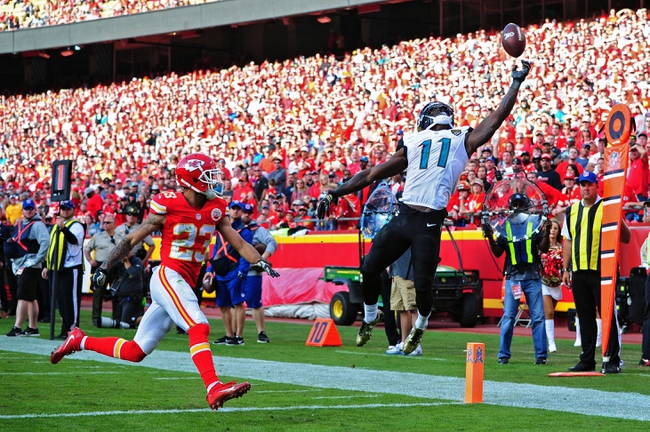 The Jacksonville Jaguars and the Kansas City Chiefs meet in week 5 NFL action from Arrowhead Stadium on Sunday afternoon.

The Jacksonville Jaguars will look to pull off a big road win and improve their record which currently sits at 3-1 after a 31-12 win over the Jets in their last outing. Blake Bortles has thrown for 1,095 yards, 7 touchdowns and 3 interceptions on 97 of 150 passing while T.J. Yeldon leads the Jags in rushing with 205 yards. Dede Westbrook has a team-high 21 catches for 294 yards and Keelan Cole has 225 receiving yards as well. Defensively, Calais Campbell has 3 sacks while Telvin Smith leads the Jaguars with 23 tackles this season. As a team, the Jaguars are averaging 380 yards of total offense and 22 points per game this season. The Jaguars are one of the best in the NFL defensively as well, leading in total yardage against and passing yardage against while also allowing just 14 points per game this season.

The Kansas City Chiefs will look to maintain their perfect start, currently sitting at 4-0 following a 27-23 come from behind win over Denver in their last outing. Patrick Mahomes has thrown for 1,200 yards and 14 touchdowns on 65.2% passing while Kareem Hunt has rushed for 289 yards and 3 touchdowns on 71 carries. Tyreek Hill and Travis Kelce each have 23 receptions and 3 touchdowns, with Hill outgunning Kelce 364 yards to 307. Defensively, Dee Ford, Justin Houston and Allen Bailey each have 3 sacks while Ron Parker leads the Chiefs with 21 tackles this season. As a team, the Chiefs are averaging 410.2 yards of total offense while owning the highest-scoring offense in the NFL, scoring 36.2 points per game this season.

There’s no doubt that this will be the toughest defense Mahomes has had to face, as the Jags are at the top in nearly every top category. However, there’s something special about Mahomes, and it’s not like he can’t handle a tough defense as we saw when the Chiefs rallied against Denver and until I have a reason to go otherwise, I’m going to keep backing the Chiefs. Yes, there are some defensive issues, but the pass rush is there and let’s face it, you’ve made more money going with the Chiefs than going against them this season, so I’ll lay the field goal with Kansas City.