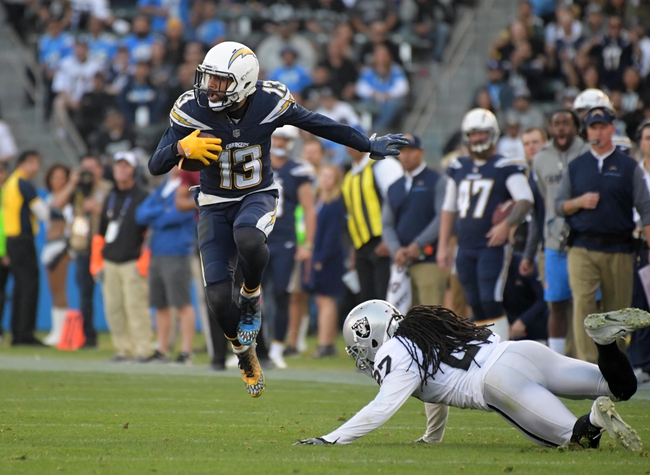 The Oakland Raiders and the Los Angeles Chargers meet in an AFC West division tilt from the StubHub Centre in Carson, California in NFL action on Sunday afternoon.

The Oakland Raiders will look to build on their first win of the season coming in the form of a 45-42 overtime win over the Cleveland Browns in their last outing. Derek Carr has thrown for 1,373 yards, 6 touchdowns and 7 interceptions in completing 71% of his passes this season, while Marshawn Lynch has 300 rushing yards and 3 touchdowns on the ground this season. Jared Cook leads the Raiders’ receiving corps with 26 catches for 370 yards and 2 touchdowns while Jordy Nelson has 274 receiving yards and Amari Cooper has 21 grabs for 270 yards this season. Defensively, Bruce Irvin and Maurice Hurst Jr. each have two sacks while Tahir Whitehead leads the team with 20 tackles this season. As a team, Oakland is averaging the 2nd most total offense per game this season with 441.8 yards of total offense and the 4th-most passing yards per game with 24.2 points per game this season.

The Los Angeles Chargers will look for a win to get back above .500 after a 29-27 win over San Francisco in their last outing. Philip Rivers has thrown for 1,156 yards, 11 touchdowns and 2 picks on 68% passing this season while Melvin Gordon III has 276 rushing yards and 2 scores for the Chargers this season. Keenan Allen leads the Chargers with 24 catches and 282 yards while Mike Williams and the aforementioned Gordon III each have 3 TD grabs with Gordon III adding 24 catches of his own this season. Defensively, Derwin James leads the Chargers with 20 tackles and 3 sacks this season to go along with an interception in his rookie campaign. As a team, Los Angeles sits 9th in the league in total offense with 403.5 yards of total offense per game, including the 8th-most rushing yards with 124.8 per game to go along with 27.8 points per game this season.

I just don’t know about the Chargers as the offense and the talent is there, L.A. just can’t seem to put if all together, losing games outright or keeping games close that should be blowout city while on the other hand you have the Raiders who don’t have the letter D in their alphabet. If forced to pick a side I’d lean Chargers, but I feel the safer play is on the total. The Chargers have scored no less than 23 points in any of their four games with the over hitting in all four while Oakland racked up 45 against the Browns last week. I think this is a game that could easily see 60+ points scored as I don’t see there being much defense being played on either side.