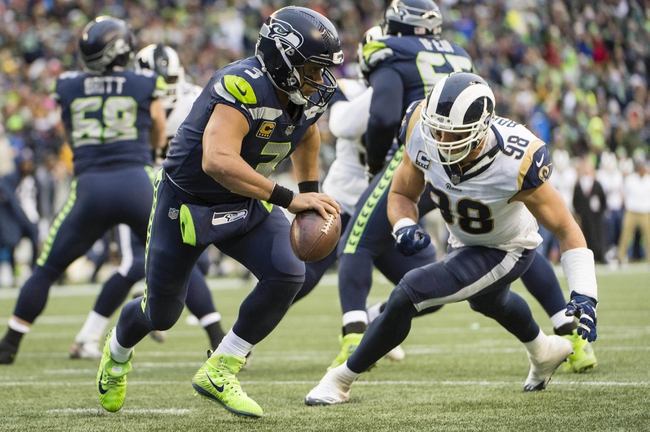 The Los Angeles Rams and the Seattle Seahawks meet in an NFC West division tilt from CenturyLink Field in week 5 NFL action on Sunday afternoon.

The Los Angeles Rams will look for another win after improving to 4-0 with a 38-31 win over Minnesota in their last outing. Jared Goff has thrown for 1,406 yards, 11 touchdowns and 2 interceptions while Todd Gurley II has rushed for 338 yards and 4 scores on the ground. Brandin Cooks leads the Rams receiving corps with 452 yards and 26 catches while Cooper Kupp has 24 grabs for 348 yards and 4 TDs and Robert Woods has 323 yards and 3 TDs with his 24 receptions. Defensively, Aaron Donald and Ndamukong Sun each have two sacks while Cory Littleton leads the Rams with 24 tackles this season. As a team, Los Angeles leads the NFL in total yardage with 468.5 yards per game and is 2nd with 343.2 yards passing and 35 points per game this season. The Rams’ defense is also getting it done, allowing just 16.8 points per game and 333.5 yards of total offense against this season.

The Seattle Seahawks will look to get back above .500 after a 20-17 win over Arizona to get back to 2-2 on the year. Russell Wilson has thrown for 888 yards, 7 touchdowns and 3 interceptions on 76 of 121 passing while Chris Carson leads the Seahawks in rushing with 177 yards on the ground. Tyler Lockett leads Seattle with 249 yards receiving with 17 receptions and 3 touchdowns this season while Will Dissly has 2 scores and Brandon Marshall has 10 receptions. On defense, Jarran Reed and Frank Clark each have 3 sacks while Bradley McDougald leads the Seahawks with 20 tackles on the year. As a team, Seattle is averaging 302 yards of total offense and 21.2 points per game this season.

Seattle at home is usually a tough out in years’ past, but something feels different about this Seahawks bunch, as the offense isn’t very good outside of Wilson and the defense is far removed from the Legion of Boom days and now this situation with Earl Thomas makes things even more murky for Seattle. The Rams are well rested after playing on Thursday and have the offense to make life hell for the Seahawks, even on the road, so I’ll lay the points with Seattle as I just don’t see this one being that close.