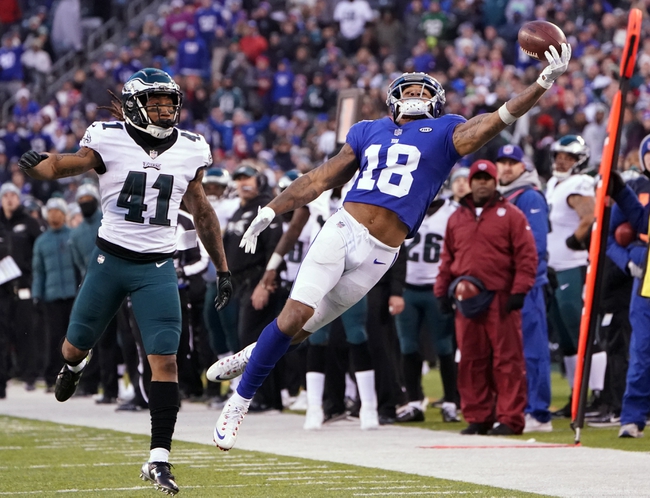 The Philadelphia Eagles and the New York Giants meet in an NFC East division tilt in week 6 NFL action from MetLife Stadium on Thursday night football.

The Philadelphia Eagles will look for a win to get back to .500 after falling to 2-3 with a 23-21 loss to Minnesota in their last outing. Carson Wentz has thrown for 914 yards, 5 touchdowns and an interception on 67.2% passing while Jay Ajayi led the Eagles with 184 rushing yards and 3 touchdowns but it came out earlier this week that Ajayi has torn his ACL and will miss the rest of the season. Zach Ertz leads the Eagles with 41 catches for 437 yards while Nelson Agholor has 29 grabs for 212 yards. Defensively, Fletcher Cox leads Philly with 3 sacks while Jordan Hicks is Philadelphia’s leading tackler with 32 tackles this season. As a team, Philadelphia is averaging 363.8 yards of total offense and 20.6 points per game while sitting 2nd defensively in terms of rushing yards against (66.4 ypg) and 7th in scoring defense (20.8 ppg) this season.

The New York Giants are in dire need of a win after a 1-4 start after back-to-back defeats, including a narrow 33-31 loss to Carolina in their last outing. Eli Manning has thrown for 1,381 yards, 6 touchdowns and 3 picks on 71.7% passing this season while Saquon Barkley has rushed for 308 yards and 3 touchdowns. Odell Beckham Jr. leads the Giants with 39 catches for 462 yards while Sterling Shepard has 28 grabs for 304 yards and a pair of TDs this season. B.J. Hill leads the Giants on defense with 2 sacks while Landon Collins is New York’s leading tackler with 25 tackles this season. As a team, New York is averaging 337.8 yards of total offense and 20.8 points per game this season.

The Giants could be on even terms with the Eagles right now had it not been for a 63-yard field goal for Carolina that gave the Giants another L. However, the Eagles have had Big Blue’s number ATS over the years, especially at MetLife Stadium. The problem with Philadelphia is that I can’t back the Eagles on a short turnaround after losing their running back for the season. Instead, I’m going to side with the over as the offense for both sides is still there that can put up some points and the over has been a common trend when these two meet, hitting in the last 5 meetings and hitting in the last 6 meetings in New York.