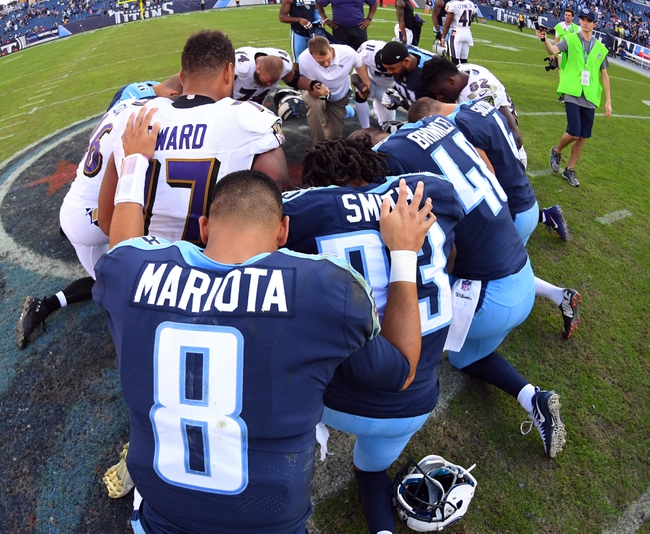 A pair of 3-2 teams face off in the Music City on Sunday as the Tennessee Titans host the Baltimore Ravens in a battle of two scrappy AFC playoff contenders.

The Ravens look for their 4th win of the season as they take to the road to face off against a Titans side who is quietly winning football games as this contest has all the makings of being an ugly, war of attrition type game. Baltimore is built on the strength of their defense and while the unit is led by the long time veteran Terrell Suggs they are still one of the most physical units in the league and against a Tennessee offense that has struggled mightily at times this season expect Suggs and company to tee off. Baltimore will need to establish the ground game here and get both Alex Collins and Buck Allen involved to take some pressure off of Joe Flacco and if they can do so the underrated receiving corps of the Ravens should find some separation downfield.

The Titans meanwhile haven’t been the world beater some expected to see at the onset of the season as they have battled injuries and just some bad play but they are still 3-2 on the year and have pulled off some impressive victories. Derrick Henry was supposed to take over as the lead back in Tennessee this season after Demarco Murray retired but he has been a disappointment so far and is losing critical snaps to Dion Lewis. However, that is more of a concern for fantasy players instead of the Titans brass and coaching staff and as long as the Titans are moving the football and gaining positive yards they don’t really care who is getting them.

The Ravens and Titans are similar groups and this one figures to be a low scoring, hard fought battle in a game that figures to be won ugly. As such, the Ravens have a bit more experience in those types of games and should be able to keep this one close if not win outright.