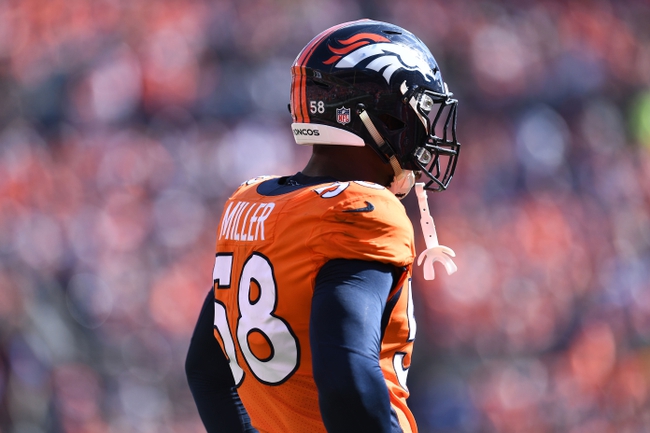 The Denver Broncos could use a statement victory to snap a three-game losing streak and get back to a .500 record. The Denver Broncos have lost five of their last eight home games. Case Keenum is completing 63.5 percent of his passes for 1,365 yards, five touchdowns and seven interceptions. Keenum has thrown at least one interception in all five games this season. Emmanuel Sanders and Demaryius Thomas have combined for 659 receiving yards and three touchdowns while Courtland Sutton has 10 receptions. The Denver Broncos ground game is averaging 137 yards per contest, and Phillip Lindsay leads the way with 328 yards and one touchdown. Defensively, Denver is allowing 26.2 points and 395.8 yards per game. Todd Davis leads the Denver Broncos with 34 tackles, Von Miller has four sacks and Adam Jones has one interception.

The Los Angeles Rams have been a little shaky defensively the last couple of games and playing back-to-back road games is never easy in this league. However, the Rams are still outscoring teams by 15 points this season and have scored no less than 33 points in every game. The Denver Broncos are being outscored by 11.6 points during their three-game losing streak and have scored more than 20 points just once in their last four games. The Los Angeles Rams are 6-2-1 ATS in their last nine games when favored by at least seven points, and that includes a 2-1-1 ATS record this season. The Denver Broncos are 4-9-1 ATS in their last 14 games when an underdog of at least seven points. It's never easy to play in Denver and the Rams have some key players banged up on the offensive side of the ball. However, the Rams have been so consistent this season that I'm not sure it matters. I'm going to ride the hot hand. The numbers also suggest the Broncos don't have the firepower to keep up with the Rams offensively. I'll eat the touchdown.

The pick in this article is the opinion of the writer, not a Sports Chat Place site consensus.
Previous Pick
NFL Picks and Odds for Week 6 2018: Sports Pick Info Podcast
Next Pick
Dallas Cowboys vs. Jacksonville Jaguars - 10/14/18 NFL Pick, Odds, and Prediction