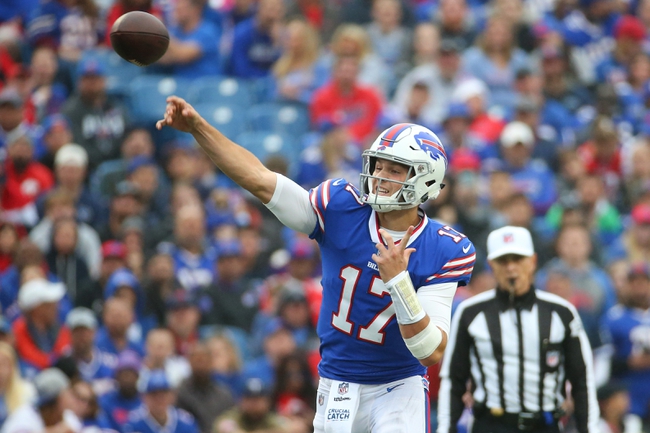 The Buffalo Bills and the Houston Texans meet in week 6 NFL action from NRG Stadium on Sunday afternoon.

The Buffalo Bills will look to build some steam after escaping with a 13-12 win over the Tennessee Titans in their last outing. Josh Allen leads Buffalo with 748 passing yards, 2 touchdowns and 5 interceptions in completing 53.3% of his pass attempts this season while also rushing for 3 touchdowns. LeSean McCoy has 170 rushing yards while Zay Jones leads Buffalo with 164 receiving yards and 13 receptions this season. Defensively, Jerry Hughes leads the Bills with 3 sacks while Tremaine Edmunds leads the Bills with 25 tackles this season. As a team, Buffalo is averaging 221.2 yards of total offense and 12.6 points per game this season.

The Houston Texans will look to build on back-to-back 3-point overtime wins, including a 19-16 win over Dallas in their last outing to improve to 2-3 this season. Deshaun Watson has thrown for 1,621 yards, 8 touchdowns and 5 interceptions on 65.1% passing this season while Lamar Miller leads the Texans in rushing with 225 yards. DeAndre Hopkins leads the Houston receiving corps with 39 catches for 594 yards while Will Fuller V has 3 touchdown receptions this season. Defensively, J.J. Watt is tied for the league lead with 6 sacks this season, while Zach Cunningham leads the Texans with 26 tackles this season.

The road hasn’t been kind to the Bills this season, as they’ve scored 3 combined points in their two road losses this season. However, the Bills also defeated Minnesota on the road, and I’m not ready to lay this many points with Houston, even at home, as the Texans haven’t been THAT much better than the Bills this season. Buffalo has shown signs of life lately, and while I’m not sure how long it lasts, I think the Bills can keep this one within a touchdown so I’ll take the points with Buffalo in this spot.