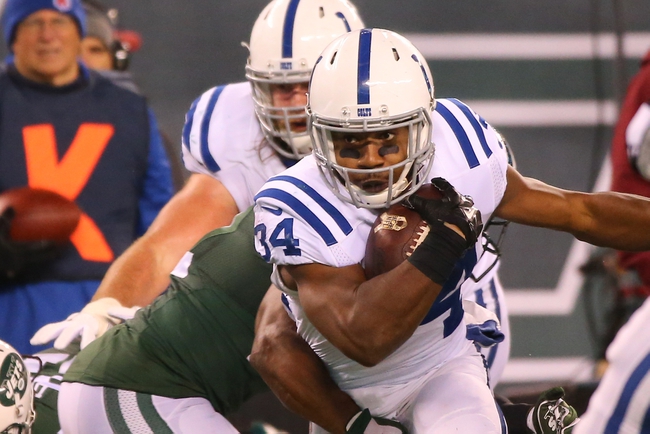 The Indianapolis Colts and the New York Jets meet in week 6 NFL action from MetLife Stadium on Sunday afternoon.

The Indianapolis Colts are in dire need of a win after falling to 1-4 with their third straight loss coming in the form of a 38-24 loss to New England in their last outing. Andrew Luck has thrown for 1,491 yards, 12 touchdowns and 5 interceptions on 66.5% passing this season while Jordan Wilkins has rushed for 175 yards. T.Y. Hilton leads the Colts’ receiving corps with 294 receiving yards while Eric Ebron has a team-high 26 catches for 255 yards and 5 touchdowns. Defensively, Darius Leonard and Margus Hunt lead the Colts with 4 sacks apiece, with Leonard also leading the Colts with 38 tackles this season. As a team, Indianapolis is averaging 357.4 yards of total offense and 23.6 points per game this season.

The New York Jets will look to build some steam after snapping a 3 game losing streak with a 34-16 win over the Denver Broncos in their last outing. Sam Darnold has thrown for 1,066 yards, 7 touchdowns and 6 interceptions on 55.7% passing this season. Isaiah Crowell leads the Jets with 390 rushing yards and 5 touchdowns while Bilal Powell has chipped in 264 rushing yards and Quincy Enunwa leads New York with 21 catches for 278 yards on the year. Defensively, Leonard Williams leads the Jets with 3 sacks while Avery Williamson and Jamal Adams are tied for the Jets’ lead with 27 tackles apiece this season. As a team, New York is averaging 333.8 yards of total offense per game including the 6th-most rushing yards per game in the league with 135 per contest and 24.6 points per game this season.

I try to fade the Jets as much as I can because I simply don’t feel that the Jets are a very good football team. However, the Colts, while being the more rested team, are also banged up like crazy with 14 players including Marlon Mack, T.Y. Hilton and Eric Ebron all listed as questionable or doubtful for this game. The Colts are lucky that Andrew Luck isn’t on that list after allowing him to be sacked 10 times and hit 38 times this season. The Jets don’t have the most fearsome pass rush in the world but they have had Indy’s number ATS over the years, so while I never thought I’d say this, I have to lay the points with the more trustworthy team here and that’s New York.