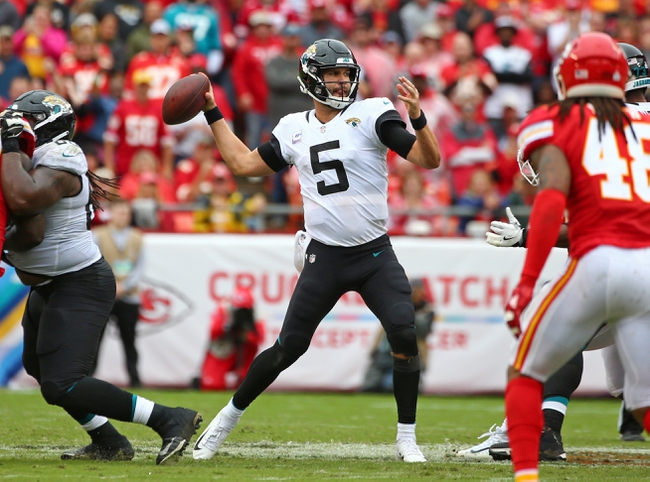 The Jacksonville Jaguars and the Dallas Cowboys meet in week 6 NFL action from AT&T Stadium on Sunday afternoon.

The Jacksonville Jaguars will look to find some consistency after alternating wins and losses in each of their last four games following a 30-14 loss to the Kansas City Chiefs in their last outing. Blake Bortles has thrown for 1,525 yards, 8 touchdowns and 7 interceptions on 61.6% passing this season while T.J. Yeldon has rushed for 258 yards. Dede Westbrook leads Jacksonville’s receiving corps with 24 catches for 349 yards while Keelan Cole and Donte Moncrief each have 200+ receiving yards this season. Defensively, Calais Campbell leads Jacksonville with 3 sacks while Telvin Smith Sr. leads Jacksonville with 31 tackles this season. As a team, Jacksonville is averaging 404.4 yards of total offense and 20.4 points per game this season. The Jaguars’ D is one of the best in the league, leading the NFL in total yardage against (292.2 YPG) and passing yardage against (191 YPG) and sitting 3rd in scoring defense, allowing just 17.2 points per game this season.

The Dallas Cowboys will look to rebound and find some consistency after alternating wins and losses through the first 5 games of the season after a 19-16 overtime loss to Houston in their last outing. Dak Prescott has thrown for 961 yards, 5 touchdowns and 4 interceptions on 61.8% passing while Ezekiel Elliott has rushed for 480 yards this season. Cole Beasley leads the Cowboys with 193 receiving yards and Tavon Austin has a pair of TD grabs while the aforementioned Elliott has a team-high 22 catches out of the backfield this season. Defensively, Demarcus Lawrence leads Dallas with 5.5 sacks while Leighton Vander Esch leads the Cowboys with 34 tackles this season. As a team, Dallas is averaging 307.8 yards of total offense per game, including the 5th-most rushing yards per game with 135.8 YPG along with 16.6 points per game this season. The Cowboys are also tough to crack defensively, allowing the 8th-fewest total yardage against (337.4 YPG) and the 5th-fewest points against per game (19.2 PPG) this season.

Points at home with Dallas is tempting, but I’ve often said it’s Elliott and Prescott or bust for the Cowboys and while that’s still true, the Cowboys are having a hard time getting points on the board even with the 1-2 punch in the backfield. The Jaguars aren’t a juggernaut on offense, but their defense is one of the best in the NFL in all facets and can suffocate some of the best offenses in the league, just ask New England. All in all, I think this is a game in which defense wins out and Jacksonville takes it so I’ll lay the points with the Jaguars here.