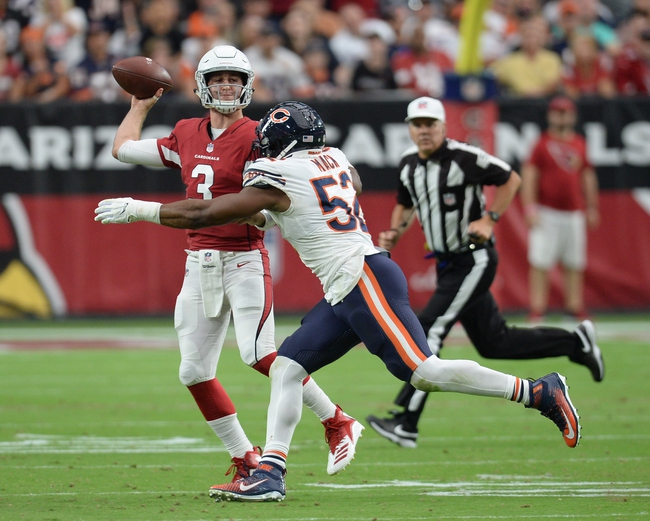 The Chicago Bears and the Miami Dolphins meet in week 6 NFL action from Hard Rock Stadium on Sunday afternoon.

The Chicago Bears come into this one rested after their bye week, sitting at 3-1 after a 48-10 victory over Tampa Bay in their last outing. Mitch Trubisky has thrown for 945 yards, 8 touchdowns and 3 interceptions. Jordan Howard leads the Bears with 203 rushing yards while Allen Robinson II leads the Bears’ receiving corps with 217 yards and Taylor Gabriel has a team-high 22 receptions this season. Defensively, Khalil Mack leads the Bears with 5 sacks through his first 4 games, while Eddie Jackson has a pair of interceptions and Danny Trevathan has a Chicago-high 16 tackles this season. As a team, Chicago is averaging 341 yards of total offense and the 7th-most points per game with 27.8 per game this season. The Bears’ D sits top-10 in total yardage (294.5 ypg/3rd in NFL), passing yards against (230.5 ypg/9th), rushing yards against (64 ypg/1st) and scoring defense (16.2/3rd) this season.

The Miami Dolphins will look to rebound after back-to-back losses, including a 27-17 loss to Cincinnati in their last outing that saw the Fins blow a 17-0 lead and allow 24 points in the 4th quarter en route to the loss. Ryan Tannehill leads the Dolphins with 972 passing yards, 8 touchdowns and 5 interceptions in completing 65.9% of his 129 pass attempts this season. Frank Gore leads Miami with 202 rushing yards and Kenny Stills leads Miami with 241 receiving yards while Albert Wilson and Kenyan Drake each have a team-high 17 receptions. Defensively, Reshad Jones has 2 interceptions and Jerome Backer and William Hayes each have 2 sacks while Kiko Alonso has a team-high 33 tackles this season. As a team, Miami is averaging 288.2 yards of total offense ad 19.8 points per game this season.

This line has already shifted 3 points in the Bears’ favour, and it’s not hard to see why. Trubisky finally looks comfortable under center and is fresh off of the game in which he threw for 6 touchdowns against the Bucs. The Bears are also the more rested team as the Dolphins blew a 17-0 lead and allowed 24 4th-quarter points in their loss to Cincinnati and with how Chicago’s defense is playing, it may be another long day for the Dolphins even at home. I think laying the field goal with Chicago is the play in this one.