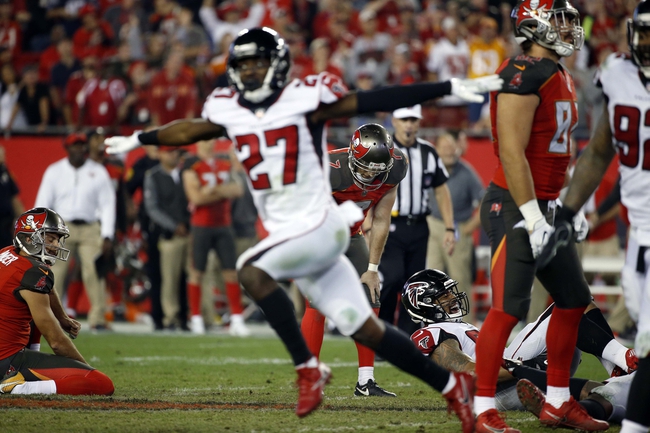 The Tampa Bay Bucs and Atlanta Falcons square off in Geogria on Sunday in what should be a shootout between NFC South division rivals.

The Bucs look for a pivotal road win against the Falcons with Jameis Winston behind center in a game that should feature plenty of offense and very little defense. Tampa Bay started the season off with a bang as Ryan Fitzpatrick looked like the quarterback who signed a huge contract with the Buffalo Bills all those years ago but he has since been removed in favour of former first overall pick in Winston as Tampa looks to get their season back on track. The Bucs are 2-2 on the season while the Falcons are 1-4 and are looking like one of the league’s biggest disappointments so you can be sure they will be ready to light up the scoreboard as well in this one.

The Falcons meanwhile head into Sunday’s encounter approaching desperation mode as they are quickly slipping out of the playoff discussion in the NFC and for a team that was expected by some to be a potential Super Bowl threat a disappointment would be an understatement. Atlanta has the pieces on offense led by Matt Ryan, Julio Jones, Tevin Coleman, and Mohamed Sanu but they haven’t been able to turn that talent into victories and as such they are slipping out of contention altogether. Jones has yet to get into the endzone despite being among the league leaders in receiving yards and that trend needs to stop today or else the Falcons could run the risk of sliding to 1-5.

The Bucs have looked the part of a playoff team at times this season but the real group we expected is started to flash and in a divisional show down on the road against a desperate Falcons side I am not sure they will be able to do enough to get the win and cover.