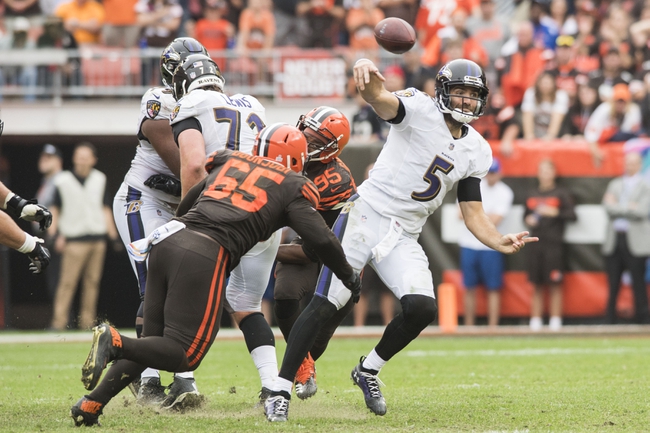 The Baltimore Ravens and the Tennessee Titans meet in week 6 NFL action from Nissan Stadium on Sunday afternoon.

The Baltimore Ravens will look to bounce back after falling in overtime by a final score of 12-9 against the Cleveland Browns in their last outing. Joe Flacco has thrown for 1,550 yards, 8 touchdowns and 3 interceptions on 61.2% passing this season while Alex Collins has rushed for 217 yards and Javorius Allen has 3 rushing TDs this season. John Brown leads the Ravens in receiving with 396 yards and 3 touchdowns while Michael Crabtree has a team-high 24 receptions for 250 yards and Willie Snead IV has 23 catches for 253 yards. Defensively, Terrell Suggs leads the Ravens with 3.5 sacks this season while Tony Jefferson has an interception and a team-high 25 tackles on the year. As a team, Baltimore is averaging 399.4 yards of total offense and 26.4 points per game this season. The Ravens also sit top-5 defensively in terms of total yardage against (303.8 ypg/4th in NFL), passing yards against (215.4 ypg/5th), rushing yards against (88.4 ypg/5th) and scoring defense (15.4 ppg/2nd) this season.

The Tennessee Titans will look to bounce back after having their three game winning streak snapped thanks to a 13-12 loss to the Buffalo Bills in their last outing. Marcus Mariota has thrown for 676 yards, 2 touchdowns and 4 picks on 63.1% passing this season while Derrick Henry has rushed for a team-high 219 yards this season. Corey Davis leads Tennessee in receiving with 26 catches for 361 yards while Dion Lewis has 21 receptions out of the backfield for the Titans. Defensively, Jurrell Casey leads the Titans with 3 sacks while Kevin Byard and Malcolm Butler are tied for the Titans’ lead with 25 tackles this season. As a team, Tennessee is averaging 294 yards of total offense and 17.4 points per game this season. The Titans’ defensive unit is also tight, sitting 7th in total yardage (333.2 ypg) and top-5 in passing yardage against (210 ypg/4th in NFL) and scoring defense (17.2 ppg/5th) this season.

Of these two teams, I have to say the one I trust more to get back on track is Baltimore, as I’ve just never really felt comfortable backing the Titans for anything. However, the Ravens let one slip away against Cleveland and there’s no denying how good both teams have been on defense this season, which is why I’m going to side with the under. Both teams are top-5 in the league in terms of points allowed, and given how their last few games have played out, a low scoring 17-13 style of game wouldn’t be out of the question so I’ll side with the under in what I see being a mirror performance of last week for both teams.