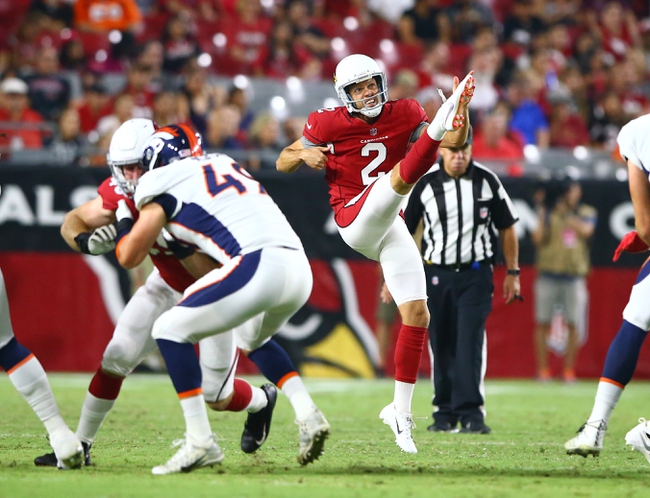 The Denver Broncos will visit the Arizona Cardinals at University of Phoenix Stadium on “Thursday Night Football” this week.

The Broncos enter this game with a 2-4 record so far. Denver posted wins over the Seahawks and Broncos in the first two games, then dropped their next four versus the RAvens, Chiefs, Jets and Rams.

In the Rams game, Denver QB Case Keenum managed 322 yards with two TDs and two picks, and Royce Freeman logged 22 yards to lead the rush. Emmanuel Sanders was the top Denver receiver on 115 yards and a TD from seven grabs.

Over on the Cardinals’ side, they’re sitting at 1-5 on the year. Arizona’s lone win came in Week 5 against the 49ers 28-18, but otherwise they’ve fallen to the Redskins, Rams, Bears, Seahawks and Vikings.

In that Minnesota game, Arizona QB Josh Rosen put up 240 yards and a pick, and David Johnson was the lead rusher with 18 carries for 55 yards and a TD. Christian Kirk led the receivers on his six catches and 77 yards.

Denver has been written off for the most part following this four-game losing streak, but in two of those games, the Broncos fell by just four points to the Chiefs and three to the Rams—both very good teams.

As for the Cardinals, they haven’t been able to get much going at all. Defensively they haven’t been downright awful, but they’re simply not scoring on the other side. Arizona has posted 17 points or fewer in five of six games this year.

I’m not thrilled about either of these teams, but Denver seems more capable of covering here. I’m going Broncos.

The pick in this article is the opinion of the writer, not a Sports Chat Place site consensus.
Previous Pick
NFL Picks and Odds for Week 7 2018: Sports Pick Info Podcast First Look at Early Lines
Next Pick
Baltimore Ravens vs. New Orleans Saints - 10/21/18 NFL Pick, Odds, and Prediction