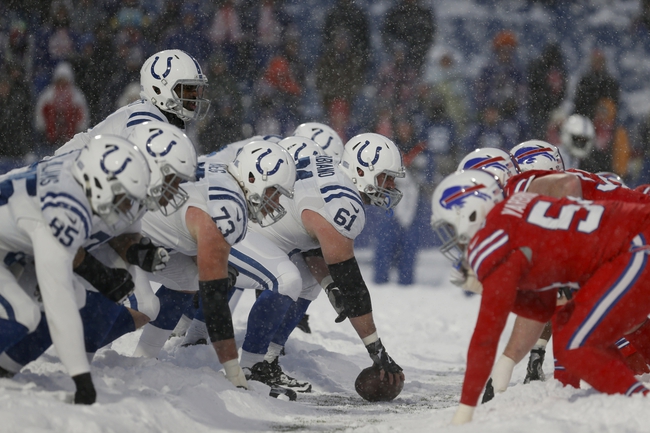 The Buffalo Bills and the Indianapolis Colts will match up at Lucas Oil Stadium on Sunday in NFL activity.

The Bills enter this game with a 2-4 record overall. Buffalo’s wins came against the Vikings and Titans, but otherwise they’ve lost to the Ravens, Chargers, Packers and Texans.

In the Texans game, Bills QB Josh Allen posted 84 yards, while Nathan Peterman had a TD and two picks. LeSean McCoy led the Buffalo rush with his 73 yards on 16 carries, and Kelvin Benjamin put up 43 yards on two catches.

Over on the Colts’ side, they’re sitting at 1-5 on the season. Indy’s lone win came against the Redskins in Week 2, and they’ve dropped games to the Bengals, Eagles, Texans, Patriots and Jets.

In the Jets game, Colts QB Andrew Luck put up 301 yards, four TDs and three picks, while Marlon Mack managed 89 yards on the ground. Eric Ebron led the receivers with his 71 yards and a TD from four grabs.

Buffalo started out the year pretty darn bad, giving up 78 points in their first two games, but since then they’ve gotten a lot better on defense and have given up 32 points across their last two games.

As for the Colts, they’ve had some duds this year but also a couple of flashes. The problem is that they have no running game (and Luck has to throw 50 times a week) and their defense isn’t great.

This is actually a pretty good matchup overall. Still, I think Luck can out-duel the Bills offense so I’m going Colts.