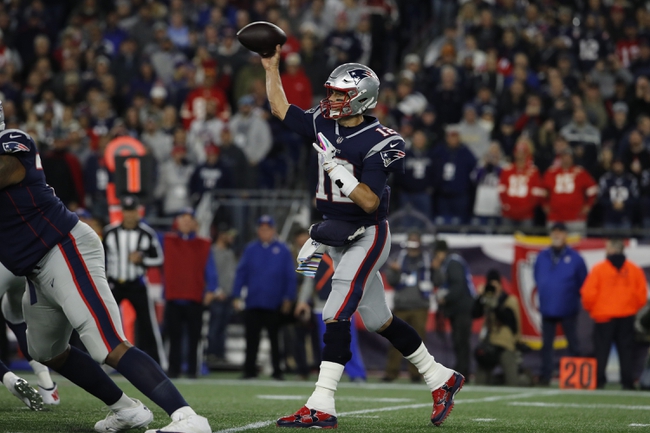 The New England Patriots will visit the Chicago Bears at Soldier Field in NFL action on Sunday.

The Patriots enter this one at 4-2 on the season. New England’s two losses came to the Jaguars and Lions, but otherwise they’ve beaten the Texans, Dolphins, Colts and Chiefs.

In that (admittedly epic) Chiefs game, Patriots QB Tom Brady led the way with 340 yards and a TD, while Sony Michel put up 106 yards rushing with two scores. Rob Gronkowski hauled in three grabs for 97 yards to top the New England receivers.

As for the Bears, they’re coming in at 3-2 here. Chicago has wins against the Seahawks, Cardinals and Buccaneers this year, but has dropped a couple of tough games (while coughing up leads) versus the Packers and Dolphins.

In the Miami loss, Bears QB Mitch Trubisky posted 316 yards with three scores and a pick, and Jordan Howard led the rushers with 69 yards. Taylor Gabriel was the leading receiver with 110 yards on five catches.

A few short weeks ago, people were giving up the Patriots for dead and declaring their dynasty of dominance to be finished. All that talk seems like ancient history now following three straight wins where the Pats scored at least 38 points in each.

As for Chicago, that Dolphins loss really smarts, but all in all they’re still in okay shape. That said, the Bears simply MUST put some pressure on Brady in this game and put the memory of that sub-par defensive effort behind them.

I think the Bears will likely flirt with a cover, but I can’t pick against New England here.