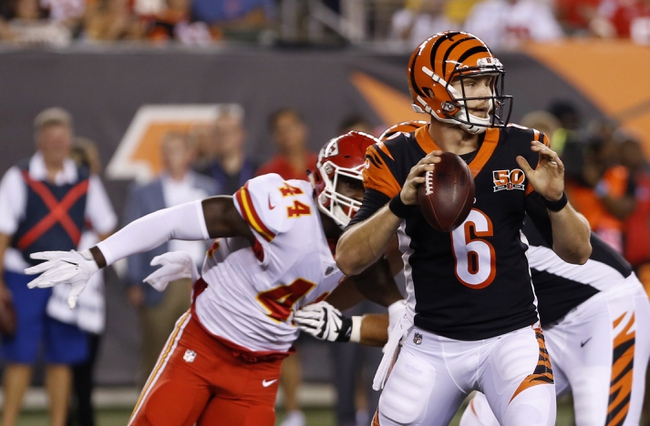 The Cincinnati Bengals and the Kansas City Chiefs will meet up on “Sunday Night Football” this week in NFL action from Arrowhead Stadium.

The Bengals come into this game with a 4-2 record overall. Cincinnati has put up wins over the Colts, Ravens, Falcons and Dolphins, and otherwise lost to the Panthers and Steelers.

In that Pittsburgh game, Bengals QB Andy Dalton logged 229 yards with two touchdowns, while Joe Mixon put up 64 yards and a TD on the ground. AJ Green led the Cincy receivers with 85 yards and seven grabs.

Over on the Chiefs’ side, they’re sitting at 5-1 on the year. Kansas City won their first quintet against the Chargers, Steelers, 49ers, Broncos and Jaguars but then dropped a classic game against the Patriots 43-40.

In that Pats game, KC QB Patrick Mahomes logged 352 yards with four TDs and two INTs, while Kareem Hunt rushed for 80 yards on 10 carries. Tops in receiving for the Chiefs was Tyreek Hill with 142 yards and three scores on seven catches.

The Bengals have been pretty darn impressive this year, and they’ve taken out some quality teams. The Steelers game was a bit of a slip-up, and this one will not be any easier (nor will the Saints game in a couple of weeks).

As for the Chiefs, they’re now the trendy pick to represent the AFC in the Super Bowl, even with the Pats loss last week. KC’s offense is a machine, and they’ve failed to reach 30 points just once this year (27 against the Broncos).

I have to go with the Chiefs here.