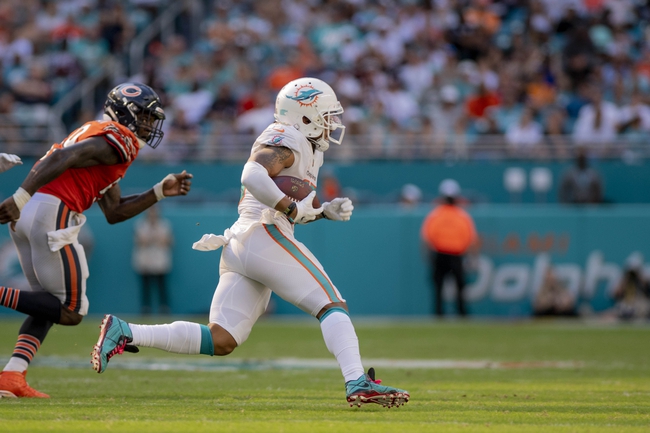 The Detroit Lions and the Miami Dolphins meet in week 7 NFL action from Hard Rock Stadium on Sunday afternoon.

The Detroit Lions come into this one rested after their bye week after alternating wins and losses in each of their last 4 games following a 31-23 victory over Green Bay in their last outing. Matt Stafford has thrown for 1,385 yards, 10 touchdowns and 5 interceptions on 66% passing while Kerry Johnson has rushed for 286 yards this season. Golden Tate leads Detroit with 33 catches for 431 yards and 3 touchdowns while Kenny Golladay has 428 yards and 3 touchdowns as well. Defensively, Devon Kennard leads the Lions with 5 sacks while Jarrad Davis has a team-high 26 tackles this season. As a team, Detroit is averaging 365.2 yards of total offense and 25 points per game this season.

The Miami Dolphins will look to build up some momentum after snapping a mini 2-game losing streak with a 31-28 overtime win over Chicago in their last outing. Brock Osweiler got the start against Chicago and has thrown for 415 yards, 4 touchdowns and 2 interceptions this season while Frank Gore has rushed for 303 yards this season. Albert Wilson leads the Dolphins with 359 receiving yards and 4 touchdowns while Kenny Stills has 276 receiving yards and Danny Amendola has a team-high 24 catches. Defensively, three Dolphins are tied for the team lead with 2 sacks apiece, while Kiko Alonso leads Miami with 42 tackles this season. As a team, Miami is averaging 330.3 yards of total offense and 21.7 points per game this season.

I try to fade Miami as much as the next person, and I’m especially not a fan of Brock Osweiler’s but there’s no denying how good the Dolphins looked in rallying to beat the Bears last week. Detroit has a good offense, but the Lions still have yet to find success on the road, while the Dolphins have been a tough out at home dating back to last season, so I’ll back Miami in this spot.