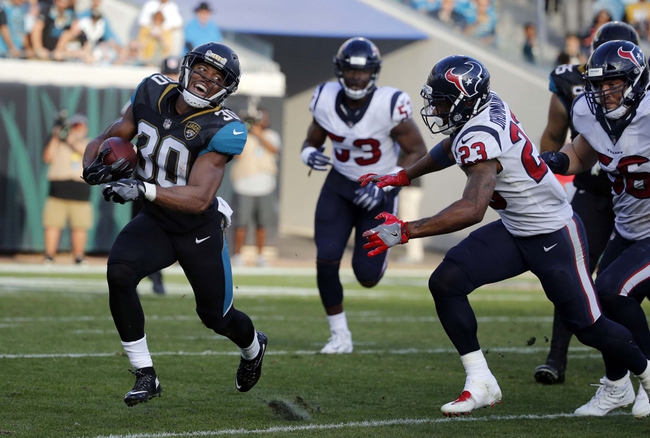 The Houston Texans will look to build on their current 3 game winning streak following a 20-13 win over Buffalo in their last outing. Deshaun Watson has thrown for 1,798 yards, 9 touchdowns and 7 interceptions on 64.5% passing while Lamar Miller leads the Texans in rushing with 271 yards this season. DeAndre Hopkins leads the Texans in rushing with 44 catches for 657 yards and 3 TDs, while Will Fuller V has 3 touchdowns of his own this season. Defensively, J.J. Watt leads the NFL in sacks with 7 this season, while Zach Cunningham leads Houston with 36 tackles this season. As a team, Houston is averaging 388.8 yards of total offense and 22.5 points per game this season.

The Jacksonville Jaguars will look to bounce back after losses in 3 of their last 4 games following a 40-7 beatdown at the hands of Dallas in their last outing. Blake Bortles has thrown for 1,674 yards, 9 touchdowns and 8 interceptions on 61.2% passing while T.J. Yeldon leads the Jags in rushing with 299 yards this season. Yeldon has a team-high 3 touchdowns receiving, while Dede Westbrook has a team-high 27 catches for 387 yards. Defensively, Calais Campbell and Yannick Ngakoue each have 4 sacks while Telvin Smith Sr. leads Jacksonville with 36 tackles this season. As a team, Jacksonville is averaging 371 yards of total offense and 18.2 points per game this season. The Jaguars’ defense has been tough to crack, sitting top-10 in total yardage (306.5 YPG/2nd in NFL), passing yards (187.8 YPG/1st) and scoring defense (21 PPG/9th) this season.

I don’t want to really read too much into Houston’s winning streak, as those wins came against Indianapolis and Dallas in overtime and Buffalo pretty much gifted the W to the Texans last week. Yes, I know that Dallas beat the snot out of the Jags last week, but the fact is that Jacksonville is still a solid team at home and will be the best defense that the Colts have faced to date. I don’t think the Texans will be up to the task and as such, I’ll lay the points with Jacksonville here.