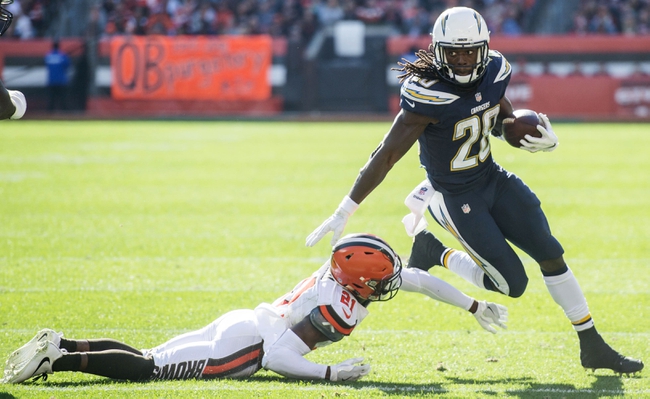 The Tennessee Titans and the Los Angeles Chargers meet in week 7 NFL action from Wembley Stadium on Sunday morning.

The Tennessee Titans come into this game looking to turn things around after back-to-back losses, including a 21-0 loss to Baltimore in their last outing. Marcus Mariota has thrown for 793 yards, 2 touchdowns and 4 interceptions on 63.6% passing this season, while Derrick Henry has rushed for 240 yards. Corey Davis leads the Titans’ receiving corps with 385 yards and 27 receptions this season. Defensively, Jurrell Casey leads Tennessee with 3 sacks while Kevin Byard is Tennessee’s leading tackler with 30 tackles this season. As a team, Tennessee is averaging 262.7 yards of total offense and 14.5 points per game this season. The Titans’ D is what’s keeping them in games, sitting top-10 in total yardage against (337.8/8th in NFL), passing yardage against (214.7/5th) and scoring defense (17.8 PPG/3rd) this season.

These London games can honestly go either way, as the travel and jet lag sometimes comes into play. However, the Chargers are showing signs of life, playing like the extremely efficient offense we expected to see coming into the season, scoring 23 or more points in all six of their games this season. The problem for Tennessee is that they’ve only broken that 23 point threshold once, and it took overtime to do it. The defense is keeping Tennessee in games, but that can only last for so long and I’m not sure that Tennessee can keep up with the Chargers offensively, so I’ll lay the touchdown with Los Angeles here.