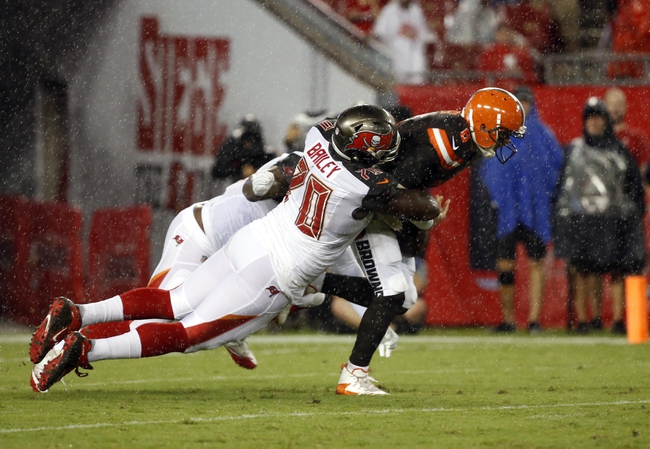 The Cleveland Browns and the Tampa Bay Buccaneers meet in week 7 NFL action from Raymond James Stadium on Sunday afternoon.

The Cleveland Browns will look to find some consistency after alternating wins and losses in each of their last 5 games following a 38-14 loss to the L.A. Chargers in their last outing. Baker Mayfield has thrown for 1,076 yards, 4 touchdowns and 5 interceptions on 55.6% passing while Carlos Hyde has rushed for a team-high 382 yards and 5 touchdowns this season. Jarvis Landry leads the Browns’ receiving corps with 392 receiving yards and 31 catches this season. Defensively, Myles Garrett has 5 sacks and Larry Ogunjobi has 3.5 sacks while Damarious Randall has a pair of interceptions and leads the Browns with 30 tackles this season. As a team, Cleveland is averaging 366.2 yards of total offense per game, including the 4th-most rushing yards per game with 137.7 along with 21.3 points per game this season.

The Tampa Bay Buccaneers will be out to snap a three game losing streak after falling to Atlanta by a final score of 34-29 in their last outing. Jameis Winston has thrown for 540 yards, 5 touchdowns and 4 interceptions on 75.4% passing this season while Peyton Barber leads Tampa Bay in rushing with 230 yards. DeSean Jackson leads Tampa Bay’s receiving corps with 501 yards and Mike Evans has a team-high 33 catches for 484 yards with each having 3 TDs. Chris Godwin has added 4 receiving scores for the Buccaneers this season. Jason Pierre-Paul leads the Buccaneers with 5 sacks while Lavonte David is Tampa Bay’s leading tackler with 33 tackles this season. As a team, Tampa Bay is averaging 448.6 yards of total offense and 28.2 points per game this season.

I’m not trying to back either one of these teams, as Cleveland, while they’ve looked better this season, have struggled with consistency and the only thing Tampa has done consistently over the last month is lose. However, I do trust Tampa’s offense just a little bit more if Winston can reduce the turnovers. I think this game means more to Tampa Bay than it does Cleveland, so I’ll lay the field goal with Tampa Bay here.