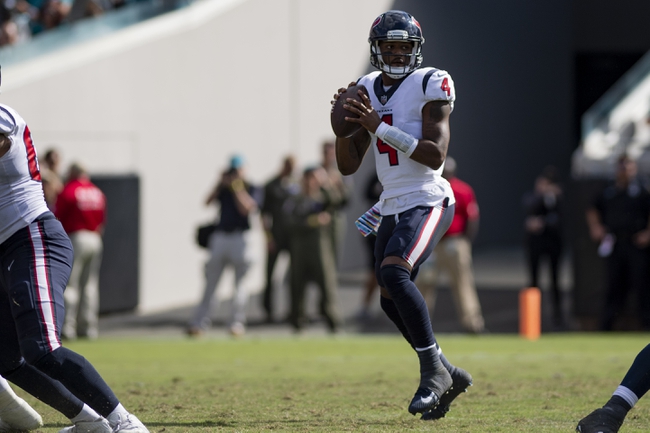 The Miami Dolphins and the Houston Texans meet in week 8 NFL action from NRG Stadium on Thursday night football.

The Miami Dolphins will look to bounce back after dropping 3 of their last 4 games following a 32-21 loss to Detroit in their last outing. Brock Osweiler has thrown for 654 yards, 6 touchdowns and 2 interceptions on 67.5% passing while Frank Gore has rushed for 332 yards and Kenyan Drake has 282 rushing yards and 2 touchdowns. Albert Wilson leads the ‘Fins with 391 receiving yards and 4 touchdowns but Wilson is expected to miss this game due to injury. Danny Amendola leads the Dolphins with 30 catches while Kenny Stills has 4 receiving touchdowns this season. Defensively, the Dolphins have three different players with 2 sacks while Kiko Alonso leads Miami with 46 tackles. As a team, Miami is averaging 329.1 yards of total offense and 21.6 points per game this season.

The Houston Texans will be looking to build on their current 4-game winning streak after a 20-7 win over Jacksonville in their last outing. Deshaun Watson has thrown for 1,937 yards, 10 touchdowns and 7 interceptions on 63.1% passing while Lamar Miller leads Houston with 371 rushing yards this season. DeAndre Hopkins leads Houston with 47 catches for 707 yards and 4 touchdowns while Will Fuller V has added 27 grabs for 379 yards and 3 scores. Defensively, J.J. Watt leads Houston with 7 sacks and Jadaveon Clowney has 4.5 sacks while Zach Cunningham leads the Texans with 44 tackles this season. As a team, Houston is averaging 372.1 yards of total offense and 22.1 points per game this season.

The Dolphins are a far different team than what we saw just a month ago, as the injuries are piling up, as are the losses. Miami is also a far different team ATS than they are at home and while Houston is 0-3 ATS at home this season, they’re the team in much, much better form right now. I’d love this line without the hook, but I’ll still lay the points with Houston as I just can’t find any ways to side with Miami right now.