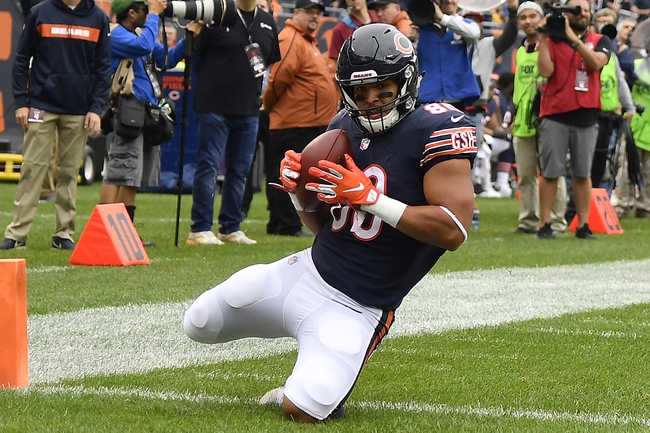 The New York Jets and the Chicago Bears will match up in NFL activity on Sunday from Soldier Field.

The Jets come in here with a 3-4 record overall. New York’s wins have come against the Lions, Broncos and Colts, while they’ve fallen to the Dolphins, Browns, Jaguars and Vikings.

In the Minnesota game, Jets QB Sam Darnold put up 206 yards, one TD and three picks, while Isaiah Crowell rushed for just 29 yards. Trenton Cannon was the top New York receiver with his 69 yards from four catches.

As for the Bears, they’re currently 3-3 on the year. Chicago has taken out the Seahawks, Cardinals and Buccaneers while dropping to the Packers, Dolphins and Patriots (all by seven points or fewer).

In the Pats game, Bears QB Mitch Trubisky logged 333 yards with two TDs and two picks, and also led the rush on 81 yards and one TD from six totes. Trey Burton was the top Bears receiver with his 126 yards and one TD on nine grabs.

If you can get in on this one at a touchdown or less, do it early—that line will likely inflate as the week goes on. The Jets offense is capable of putting up points at times, but right now they’re banged up at a few key spots and are playing guys you’ve probably never heard of. The defense is in the same injury position in the secondary, so it’s not limited to one side of the ball.

I see the Bears getting back on track at home here. If they can contain the rush and do an okay job at man coverage on the receivers, they won’t have much trouble. I’ll take Chicago.