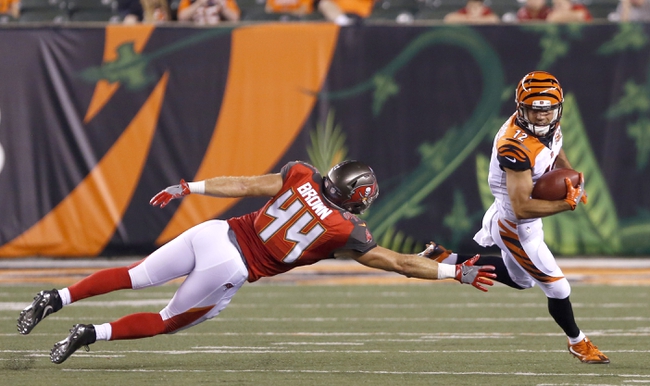 The Tampa Bay Buccaneers and the Cincinnati Bengals meet in week 8 NFL action from Paul Brown Stadium on Sunday afternoon.

The Tampa Bay Buccaneers will look for a road win to get back above .500 after a narrow 26-23 win over Cleveland in their last outing. Jameis Winston has thrown for 905 yards, 5 touchdowns and 6 interceptions on 69% passing while Peyton Barber leads the Bucs with 260 rushing yards and Mike Evans leads the Buccaneers with 40 catches for 591 yards to go along with 3 TDs. DeSean Jackson has 526 receiving yards and 3 touchdowns of his own while Chris Godwin has 4 receiving TDs this season. Defensively, Jason Pierre-Paul leads the Buccaneers with 6 sacks while Lavonte David is Tampa Bay’s top tackler with 40 tackles this season. As a team, Tampa Bay is averaging the most total yardage and most passing yards per game with 449.5 yards of total offense and 364 passing yards per game to go along with 27.8 points per game this season.

The Cincinnati Bengals will look to bounce back from back-to-back losses, including a 45-10 thumping on Sunday night football to fall to 4-3 this season. Andy Dalton has thrown for 1,822 yards, 15 touchdowns and 8 interceptions on 63.6% passing while Joe Mixon has rushed for 386 yards and Giovani Bernard has 3 rushing touchdowns this season. A.J. Green leads the Bengals’ receiving corps with 611 receiving yards and 5 touchdowns while Tyler Boyd has 4 TDs and 482 yards, with each having 40 receptions this season. Defensively, Geno Atkins leads Cincy with 6 sacks while Carlos Dunlap has 5 sacks of his own and Nick Vigil has a team-high 41 tackles this season. As a team, Cincinnati is averaging 336 yards of total offense and 26.3 points per game this season.

We all know that the Buccaneers have the worst scoring defense in the league, so the over could be worth a look considering that Tampa Bay is capable offensively as well. However, the Bengals have allowed 28 points or more in 4 of their last 5 games, and barely scraped by Atlanta despite allowing 36 points. Tampa Bay has the offensive weapons to keep up and even pass Cincinnati, and I just don’t trust Andy Dalton plain and simple so I’ll take the points with Tampa Bay as more of a fade from Dalton and the Bengals than anything else.