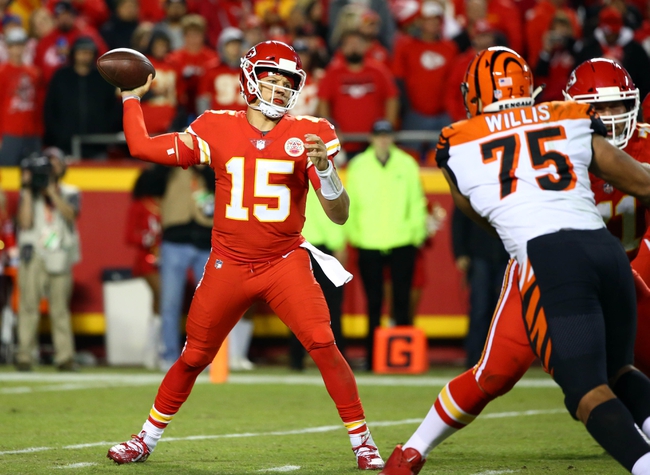 The Denver Broncos and the Kansas City Chiefs meet in a week 8 AFC West division showdown from Arrowhead Stadium on Sunday afternoon.

The Kansas City Chiefs will look for another win to improve on their 6-1 record after a 45-10 rout of Cincinnati on Sunday night football. Patrick Mahomes has thrown for 2,223 yards, 22 touchdowns and 5 interceptions on 64.9% passing while Kareem Hunt has rushed for 542 yards and 5 touchdowns this season. Hunt has 4 receiving touchdowns as well while Tyreek Hill leads KC with 41 catches for 635 yards and 7 scores and Travis Kelce has added 38 grabs for 563 yards and 3 TDs. Defensively, Dee Ford leads the Chiefs with 5 sacks and Allen Bailey has 4 sacks while Anthony Hitchens has a Chiefs-leading 37 tackles this season. As a team, Kansas City sits top-10 in total yardage (437.4 YPG/3rd in NFL), passing yards (313.1 YPG/5th in NFL), rushing yards (124.3 YPG/10th in NFL) and own the NFL’s highest-scoring offense with 37.1 points per game this season.

As good as the Chiefs have been their defense has been the Achilles heel, allowing the most total yardage against per game in the league. However, I don’t trust the Broncos to put up much yardage for anything, as a win over a lowly Arizona team does nothing to impress me. Kansas City has been on fire offensively this season, and to me, this just boils down to the Broncos not being able to keep up punch-for-punch with the Chiefs here, who are a perfect 7-0 ATS this season. It’s a thick line but I think Kansas City gets the job done.