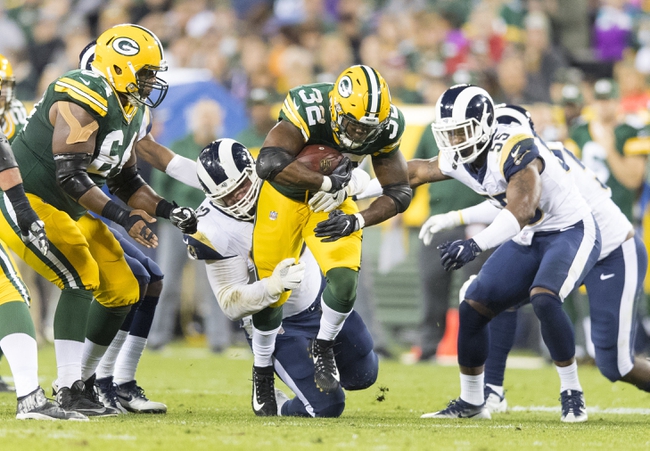 The Green Bay Packers and the Los Angeles Rams will be meeting up at LA Memorial Coliseum on Sunday in NFL activity.

The Packers come in here with a 3-2-1 record so far. Green Bay’s tie came against the Vikings, and they’ve fallen to the Redskins and Lions. Aside from that, the Pack has taken out the Bears, Bills and 49ers.

In the Niners game, Green Bay QB Aaron Rodgers put up 425 yards and two TDs, and Aaron Jones led the rush on 41 yards. Tops in receiving for the Pack was Davante Adams with 132 yards and two scores off 10 catches.

Over on the Rams’ side, they’re sitting pretty at an undefeated 7-0. LA’s victories this season have come against the Raiders, Cardinals, Chargers, Vikings, Seahawks, Broncos and 49ers.

In the 49ers game, LA QB Jared Goff logged 202 yards with two TDs, and Malcolm Brown was the top rusher with 65 yards (Todd Gurley had 63 and two scores). Robert Woods led the Los Angeles receivers on his 78 yards from five grabs.

Green Bay has some real issues this season, as they’re once again relying on (an injured) Aaron Rodgers to carry the team to victory. Otherwise, there’s not much of a run game or defense for the Pack these days.

As for the Rams, they’ve been impressing everyone with their offensive prowess, and they’ll remain the favorite to come out of the conference for quite a while regardless of what they do. Still, the spread is just a tad thick for my taste; I’m going Packers.