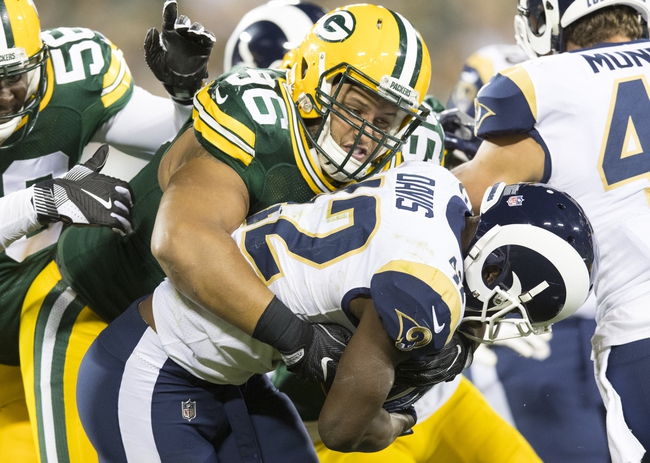 The Green Bay Packers look for a statement road victory while winning back-to-back games for the first time this season. The Green Bay Packers have lost six of their last eight road games. Aaron Rodgers is completing 61.4 percent of his passes for 1,997 yards, 12 touchdowns and one interception. Rodgers has two or more touchdown passes in nine of his last 12 games. Davante Adams and Jimmy Graham have combined for 906 receiving yards and seven touchdowns while Geronimo Allison has 19 receptions. The Green Bay Packers ground game is averaging 103.7 yards per contest, and Jamaal Williams leads the way with 224 yards on 59 carries. Defensively, Green Bay is allowing 24 points and 328.3 yards per game. Blake Martinez leads the Green Bay Packers with 51 tackles, Kyler Fackrell has three sacks and Ha Ha Clinton-Dix has three interceptions.

The Green Bay Packers have been hit or miss this season, as the defense isn't great and Rodgers has been playing on one leg for much of these games. The good news is the Packers fresh off a bye should have helped everyone, and Rodgers has to be as healthy as he's been in months. The Los Angeles Rams are the only undefeated team left in the league, and they're winning their last three games by a margin of 11.3 points. The Green Bay Packers have split their last eight games ATS when an underdog of at least seven points. The Los Angeles Rams are 7-2-2 ATS in their last 11 games when favored by at least seven points. Three of the Rams last four games have been decided by single digits. I can't bring myself to eat so much chalk when Rodgers is on the other side of the field. While there's a big talent gap between the Rams and Packers as a whole, It's the LeBron James factor with Rodgers, in that he kind of balances things out and can lead his team to a win even when the odds are stacked against him. Not saying the Packers win this game, but this many points with the GOAT? I'll take my chances.