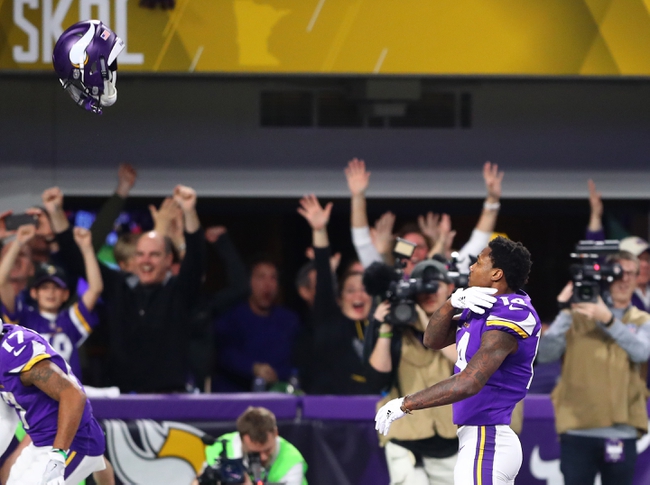 The New Orleans Saints have yet to lose a game snce their bizarre opening loss to Tampa Bay, and they're winning by a margin of 7.3 points on the road this season. Of course, the Saints will also be highly motivated for this game considering this is the same team and the same venue that pulled off the devastating last second victory in last years playoffs. The Saints had this game circled once the schedule was released. The Minnesota Vikings are beating teams by 10.6 points during their three-game winning streak and have been one of the most consistent home teams dating back to last season. The New Orleans Saints are 14-5-1 ATS in their last 20 games when an underdog of any kind. The Minnesota Vikings are 4-6-1 ATS in their last 11 games when a favorite of any kind. The Saints have thirved in the underdog role, but I still like the Vikings at home. Not only is this one of the tougher venues to win at, but the Vikings are even better offensively than they were in the previous matchup. Cousins is playing really good football, as he's completing a high number of his passes and is taking care of the football. The Vikings are also allowing an average of 20 points at home, while the Saints are allowing an average of 26 points on the road. Give me the Vikings at home in this toss-up.

The pick in this article is the opinion of the writer, not a Sports Chat Place site consensus.
Previous Pick
NFL Picks and Odds for Week 8 2018: Sports Pick Info Podcast Mid-Week Show
Next Pick
Jacksonville Jaguars vs. Philadelphia Eagles - 10/28/18 NFL Pick, Odds, and Prediction