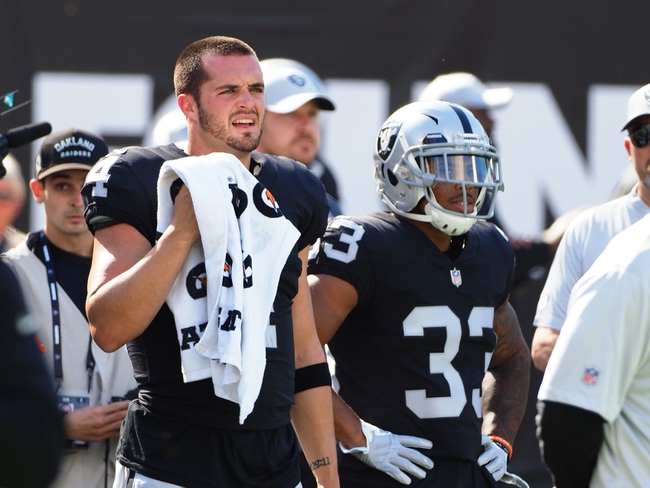 The Oakland Raiders and the San Francisco 49ers will be matching up in Bay-Area NFL activity on “Thursday Night Football” this week.

The Raiders enter this one at 1-6 on the season. Oakland’s lone win came against the Browns in Week 4, but otherwise they’ve fallen to the Rams, Broncos, Dolphins, Chargers, Seahawks and Colts.

In the Indy game last week, Raiders QB Derek Carr put up 244 yards with three touchdowns, and Doug Martin led the rush on 72 yards. Jared Cook was tops in the Oakland receiving game with 74 yards and a score from four grabs.

Over on the 49ers side, they’re sitting at 1-7 this season. San Francisco took out the Lions way back in Week 2, but have recorded losses to the Vikings, Chiefs, Chargers, Cardinals (twice), Packers and Rams.

The Raiders actually had a late lead on the Colts, but coughed up 21 unanswered points in the fourth quarter to seal their collective fate 42-28. It was the first time the offense had scored more than 10 points since the Browns game.

San Francisco has been flailing as well, with 18 points or fewer in three of their last four games. They’re already at the point of just trying to limp through the season.

There’s not a whole lot of intrigue here, even if you’re a Bay Area fan. Still, it should be a pretty close game. I’m going to stick with the Raiders to cover in a tight one.