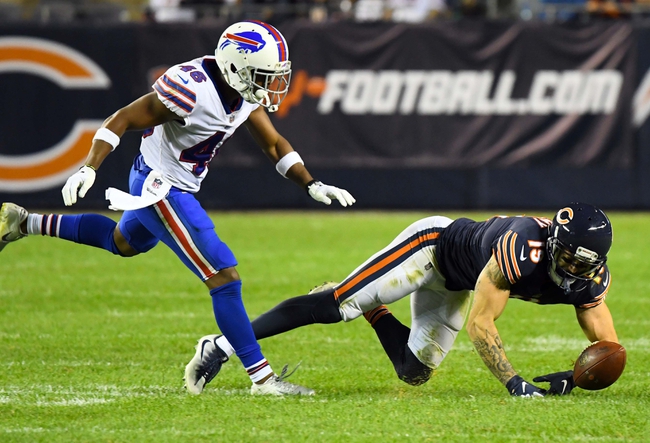 The Chicago Bears look for their second road win of the season to stay in the thick of the playoff race. The Chicago Bears have lost five of their last seven road games. Mitchell Trubisky is completing 64.6 percent of his passes for 1,814 yards, 15 touchdowns and six interceptions. Trubisky has one or less touchdown passes in 10 of his last 15 games. Tarik Cohen and Taylor Gabriel have combined for 779 receiving yards and five touchdowns while Trey Burton has 27 receptions. The Chicago Bears ground game is averaging 137.6 yards per contest, and Jordan Howard leads the way with 392 yards and three touchdowns. Defensively, Chicago is allowing 20.6 points and 329.6 yards per game. Danny Trevathan leads the Chicago Bears with 49 tackles, Khalil Mack has five sacks and Kyle Fuller has three interceptions.

The Buffalo Bills look to snap a three-game losing streak while possibly saving their season. The Buffalo Bills have lost two of their three home games this season. Derek Anderson is completing 60 percent of his passes for 465 yards, zero touchdowns and four interceptions. Josh Allen and Anderson have combined for two touchdown passes and nine interceptions this season. Zay Jones and Kelvin Benjamin have combined for 543 receiving yards and two touchdowns while Charles Clay has 19 receptions. The Buffalo Bills ground game is averaging 97.3 yards per contest, and LeSean McCoy leads the way with 257 yards on 75 carries. Defensively, Buffalo is allowing 25 points and 329.1 yards per game. Tremaine Edmunds leads the Buffalo Bills with 62 tackles, Jerry Hughes has 4.5 sacks and Jordan Poyer has two interceptions.

It's been years since the Chicago Bears were double-digit favorites against anybody. The Buffalo Bills are 2-1 ATS this season as a double-digit underdog and have covered four of their last eight as a double-digit underdog overall. I know the Bills quarterback situation is brutal, but I'm not laying this much chalk with the Bears on the road. Trubisky isn't a difference maker to help Chicago blow teams out, and teams have moved the ball against these Bears recently. Also, no matter how bad the Bills are, they compete hard, have been in games this season and playing in Buffalo is never easy due to the strong winds. Give me the points.