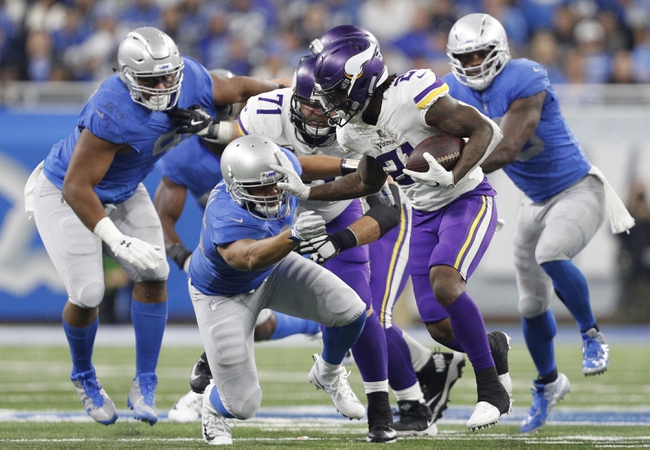 The Detroit Lions and the Minnesota Vikings meet in a week 9 NFC North division matchup from U.S. Bank Stadium on Sunday afternoon.

The Detroit Lions will look for some measure of consistency after splitting their last 6 games, including a 28-14 loss to Seattle in their last outing. Matthew Stafford has thrown for 1,912 yards, 14 touchdowns and 6 interceptions on 67.6% passing while Kerryon Johnson leads Detroit in rushing with 466 rushing yards this season. Golden Tate led the Lions with 44 catches for 517 yards but he was traded to Philadelphia on Tuesday for a draft pick. Leading Detroit now is Kenny Golladay with 477 receiving yards while Marvin Jones Jr. has 387 yards and a. Team-high 5 touchdowns this season. Defensively, Devon Kennard and Romeo Okwara lead the Lions with 5 sacks while Jarrad Davis has 3 sacks and a team-high 36 tackles this season. As a team, Detroit is averaging 373.4 yards of total offense and 24.4 points per game this season.

The Minnesota Vikings will look to rebound after having their 3 game winning streak snapped with a 30-20 loss to New Orleans in their last outing. Kirk Cousins has thrown for 2,521 yards, 16 touchdowns and 4 interceptions on 70.7% passing while Latavius Murray has rushed for 386 yards and 4 touchdowns this season. Adam Thielen leads Minnesota with 74 catches for 925 yards and 6 touchdowns while Stefon Diggs has 58 grabs for 587 yards and 4 scores. Defensively, Danielle Hunter leads Minny with 8 sacks while Harrison Smith has 3 interceptions and a team-high 32 tackles this year. As a team, Minnesota is averaging 385.8 yards of total offense and 24.6 points per game this season. The Vikings are also stout against the run, allowing just 91.8 rushing yards per game, good for 5th-fewest in the NFL.

The Lions have been solid ATS on the road, going 3-0 ATS away from home this season. However I still have trust issues with Detroit, issues that were amplified in their loss to Seattle, a game I felt the Lions should’ve been much better in. Now Detroit has to go forward after trading away their top receiver in Golden Tate and Minnesota will probably negate whatever run game the Lions were going to produce. All in all, I just don’t trust Detroit until I see that they’re able to string together consistent performances, so I’ll lay the points with Minnesota in a game I see the Vikings winning by a touchdown.