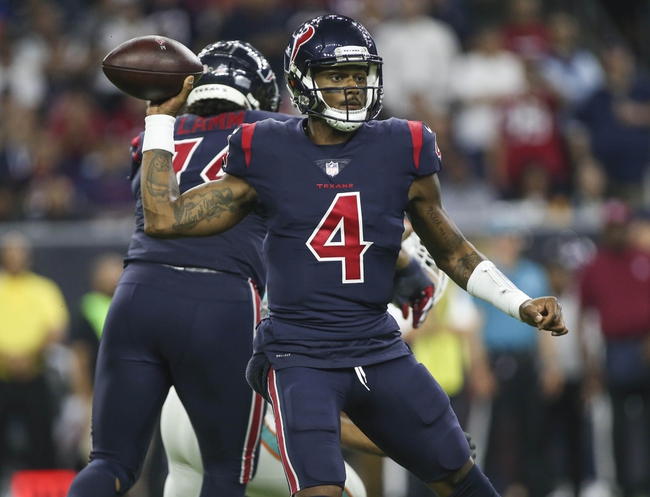 The Houston Texans and the Denver Broncos square off in week 9 NFL action from Broncos Stadium at Mile High on Sunday afternoon.

The Houston Texans will look to head into their bye week on a high note after making it 5 wins in a row with a 42-23 victory over Miami in their last outing. Deshaun Watson has thrown for 2,176 yards, 15 touchdowns and 7 interceptions on 64.4% passing while Lamar Miller leads the Texans on the ground with 504 rushing yards and 2 touchdowns this season. DeAndre Hopkins leads the Texans receiving group with 53 catches for 789 yards and 6 touchdowns and also bolstered their receiving corps by ironically acquiring their opponent’s top receiver on Tuesday, trading for Demaryius Thomas from Denver in exchange for draft picks. Defensively, J.J. Watt leads the Texans with 8 sacks and Jadeveon Clowney has added 4.5 sacks of his own, while Zach Cunningham leads the Texans with 46 tackles this season. As a team, Houston is averaging 379 yards of total offense and 24.6 points per game this season.

The Denver Broncos are in dire need of a win after losing 5 of their last 6 games, including a 30-23 loss to Kansas City in their last outing. Case Keenum has thrown for 2,110 yards, 10 touchdowns and 10 interceptions on 63.9% passing while Phillip Lindsay and Royce Freeman have combined to rush for 840 yards and 7 touchdowns. Emmanuel Sanders leads the Broncos’ receiving corps with 50 catches for 660 yards and 3 touchdowns this season. Defensively, Von Miller and Bradley Chubb have combined for 15 sacks this season while Justin Simmons leads Denver with 40 tackles this year. As a team, Denver is averaging 380.8 yards of total offense and 23.5 points per game this season.

Okay, call me crazy, but if this line is a trap, I’m biting hook, line and sinker. I know Denver hung around with Kansas City in their last outing, and have a win over Arizona before that, but the Broncos have had issues offensively, and just traded away one of their top receivers, to the team that they are playing this week no less, and have lost 5 of 6 and are in a pick ‘em against a red-hot Houston team that’s won 5 in a row? Sign me up. Houston is playing well enough that it’s worth taking the chance on, so I’ll side with the Texans to stay in form and get the win on the road here.