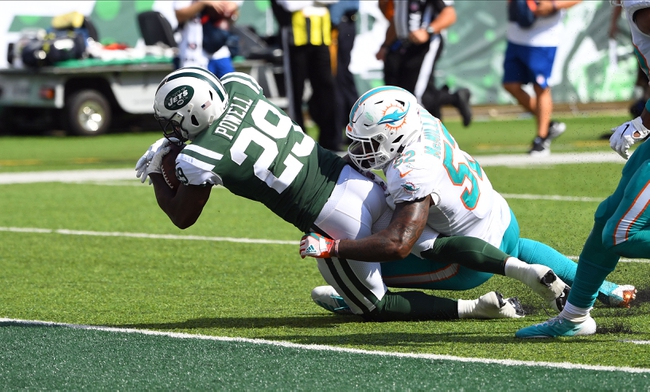 The New York Jets look for their second road win of the season after losing five of their last seven games overall. The New York Jets have lost eight of their last nine road games. Sam Darnold is completing 55.2 percent of his passes for 1,705 yards, 11 touchdowns and 10 interceptions. Darnold has two or more touchdown passes in three of his eight career games. Robby Anderson and Quincy Enunwa have combined for 601 receiving yards and four touchdowns while Jermaine Kearse has 19 receptions. The New York Jets ground game is averaging 113.8 yards per contest, and Isaiah Crowell leads the way with 484 yards and five touchdowns. Defensively, New York is allowing 25.1 points and 371.7 yards per game. Jamal Adams leads the New York Jets with 56 tackles, Leonard Williams has three sacks and Darron Lee has three interceptions.

The Miami Dolphins need a win here to save their season after losing four of their last five games. The Miami Dolphins have won seven of their last 11 home games. Brock Osweiler is completing 64.1 percent of his passes for 895 yards, six touchdowns and three interceptions. Osweiler and Ryan Tannehill have combined for 14 touchdown passes and eight interceptions this season. Albert Wilson and Danny Amendola have combined for 728 receiving yards and five touchdowns while Kenny Stills has 16 receptions. The Miami Dolphins ground game is averaging 108 yards per contest, and Frank Gore leads the way with 385 yards on 84 carries. Defensively, Miami is allowing 27.4 points and 408 yards per game. Kiko Alonso leads the Miami Dolphins with 76 tackles, Jerome Baker has two sacks and Xavien Howard has three interceptions.

The New York Jets are a team that competes hard, but each of their last three losses have come by double digits and they've produced 17 or less points in five of their last seven games. The Miami Dolphins have given up no less than 27 points in each of their last five games and have argubly the worst defense in the league right now. The New York Jets have failed to cover six of their last seven games when an underdog of at least three points. The Miami Dolphins are 4-8-2 ATS in their last 14 games when a favorite of at least three points. While laying chalk with the Dolphins probably isn't ideal, they have won four of the last five games against the Jets and have played well at home dating back to last season. The Dolphins have also had extra time to prepare for this game after playing last Thursday, and they could get some guys back from injury, including explosive wide receiver Kenny Stills. There's better options on the card, but I'll lay the field goal here.