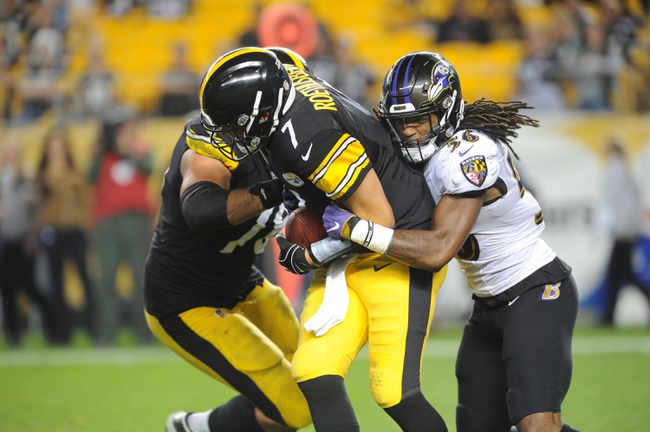 The Pittsburgh Steelers and the Baltimore Ravens meet in a week 9 AFC North division tilt from M&T Bank Stadium on Sunday afternoon.

The Pittsburgh Steelers will look to build on their current 3-game winning streak after a 33-18 win over Cleveland in their last outing. Ben Roethlisberger has thrown for 2,290 yards, 14 touchdowns and 7 interceptions on 65.3% passing while James Conner has rushed for 599 yards and 9 touchdowns this year. JuJu Smith Schuster and Antonio Brown each have a team-high 46 catches with Smith-Schuster having a team-high 594 receiving yards while Brown has 552 receiving yards and 8 touchdowns this season. Defensively, T.J. Watt leads the Steelers with 7 sacks and and 26 tackles this season. As a team, Pittsburgh sits top-5 in the NFL in total yardage and passing yardage with 418.1 yards of total offense and 318.1 passing yards per game while scoring the 5th-most points per game in the NFL with 29.1 points per contest this season.

The Baltimore Ravens will look to rebound from back-to-back losses, including a 36-21 setback at the hands of Carolina in their last outing. Joe Flacco has thrown for 2,259 yards, 12 touchdowns and 6 interceptions while Alex Collins has rushed for a team-high 358 yards and 5 touchdowns this season. John Brown leads Baltimore with 586 receiving yards while Michael Crabtree and Willie Snead IV each have a team-high 38 catches this season. Defensively, Terrell Suggs and Za’Darius Smith are tied for the team lead with 5.5 sacks this season while C.J. Mosley and Tony Jefferson are tied with 34 tackles this season. As a team, Baltimore is averaging 379.2 yards of total offense and 24.6 points per game. The Ravens are also tight defensively, sitting tops in the NFL in total yardage against (293.8 YPG) and scoring defense (17.1 PPG) and 2nd in the NFL in passing yardage against with 195.6 YPG this season.

Baltimore owns one of the best defensive units in the league, but the Ravens have allowed a combined 60 points in their last two games. The Steelers haven’t had much luck ATS in this matchup, going 1-6-1 ATS in the last 8 meetings, but they’re another solid offensive team and they’ve scored at least 30 points in 5 of their last 6 games. I know the Ravens are probably the favourite given the history of this matchup and because they’re at home, but home field hasn’t really mattered with the road team covering in each of the last 4 meetings and I think the Steelers make it 5 in a row here, not only covering but winning outright.