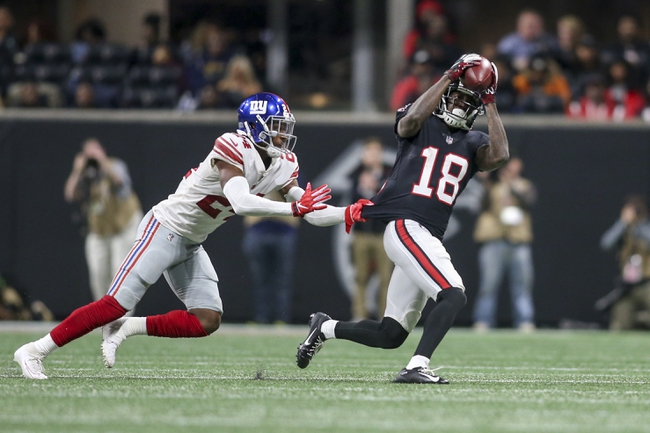 The Atlanta Falcons and the Washington Redskins meet in week 9 NFL action from FedEx Field on Sunday afternoon.

The Atlanta Falcons come into this game rested after their bye week and will be looking to build on back-to-back wins following a 23-20 win over the New York Giants in their last outing. Matt Ryan has thrown for 2,335 yards, 15 touchdowns and 2 interceptions on 71.1% passing while Tevin Coleman leads the Falcons in rushing with 310 rushing yards this season. Julio Jones leads Atlanta’s receiving corps with 53 catches for 812 yards, while Calvin Ridley has a team-high 6 touchdown catches this season. Defensively, Takkarist McKinley leads the Falcons with 6 sacks while Damontae Kazee has 3 interceptions and Brian Poole leads Atlanta with 33 tackles this year. As a team, Atlanta is averaging 401 yards of total offense, including the 3rd-most passing yards per game in the league with 317.7 along with 27.1 points per game this season.

The Washington Redskins will look to build on their three game winning streak after a 20-13 win over the Giants in their last outing. Alex Smith has thrown for 1,561 yards, 8 touchdowns and 2 interceptions on 63.2% passing while Adrian Peterson leads Washington in rushing with 587 yards and 4 touchdowns this season. Jordan Reed leads Washington’s receiving group with 29 catches for 306 yards while Paul Richardson Jr. has 246 receiving yards and Chris Thompson has 28 catches. Defensively, the trio of Matt Ioannidis, Ryan Kerrigan and Jonathan Allen have combined for 14 sacks while Mason Foster leads the Redskins with 37 tackles this season. As a team, Washington is averaging 340.7 yards of total offense, including the 8th-most rushing yards per game in the NFL with 128 along with 20.9 points per game this season. The Redskins are also getting it done on defense, sitting top-5 in the league in terms of total yardage against (322.4 YPG/5th in NFL), rushing yards (80.1 YPG/2nd) and scoring defense (19.1 PPG/5th) this season.

Both of these teams struggled to put the Giants away in their last outings respectively, but as far as this game goes, I feel that the Falcons have a distinct edge on offense. Washington’s defense could very well cancel that out as they have for much of the season, and while the thought of going against the in-form Redskins at home isn’t popular, home field hasn’t mattered in this matchup as the road team has covered in 5 of the last 6 meetings between the two sides. At the end of the day, I just think this game means slightly more to Atlanta right now as the Falcons can ill afford a misstep in the division race, so I’ll side with Atlanta to get the job done with a big road win here.