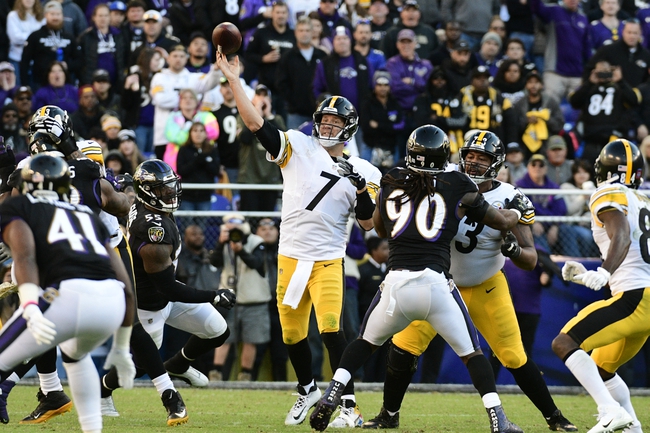 The Carolina Panthers and the Pittsburgh Steelers meet in week 10 NFL action from Heinz Field on Thursday night.

The Carolina Panthers will look to keep their momentum going after winning 3 straight and 5 of their last 6 games following a 42-28 win over Tampa Bay in their last outing. Cam Newton’s thrown for 1,893 yards, 15 touchdowns and 4 interceptions on 67.3% passing, while Christian McCaffrey has 502 rushing yards and 3 touchdowns. Devin Funchess leads the Panthers’ receiving corps with 445 receiving yards while the aforementioned McCaffrey leads Carolina with 49 catches this season. Defensively, Mario Addison leads Carolina with 7.5 sacks while Mike Adams has 3 interceptions and Luke Kuechly has a team-high 52 tackles this season. As a team, Carolina is averaging 371.6 yards of total offense, including 143.9 rushing yards per game, the 2nd-most in the NFL this season, along with 27.5 points per game.

The Pittsburgh Steelers will look to add to their 4 game winning streak, winning 5 of 6 as well following a 23-16 win over Baltimore in their last outing. Ben Roethlisberger has thrown for 2,560 yards, 16 touchdowns and 7 interceptions on 64.5% passing, while James Conner leads Pittsburgh with 708 rushing yards and 9 touchdowns this season. JuJu Smith-Schuster leads the Steelers’ receivers with 53 catches for 672 yards while Antonio Brown has added 594 receiving yards and 9 touchdowns this season. Defensively, T.J. Watt leads Pittsburgh with 7 sacks while Sean Davis has a team-high 31 tackles this season. As a team, Pittsburgh is averaging the 4th-most total yardage and the 4th-most passing yardage in the NFL this season with 415.2 yards of total offense and 313.6 passing yards per game to go along with 28.4 points per game this season.

Both of these teams come in hot offensively, and have had no issues moving the ball up and down the field, so the over may be worth a look. However, both teams are in need of a win, with Carolina chasing New Orleans and Pittsburgh trying to hold off the rest of the AFC North. With that said, the Panthers have never covered a spread in franchise history against Pittsburgh, and the Steelers have put up 30 or more points in each of the last 5 meetings against Carolina. These two only meet every four years, but in the 3 meetings with Ben Roethlisberger under center, Pittsburgh has won all 3 meetings by a combined score of 101-25, so I’ll lay the points with Pittsburgh here as the Steelers cover yet again.