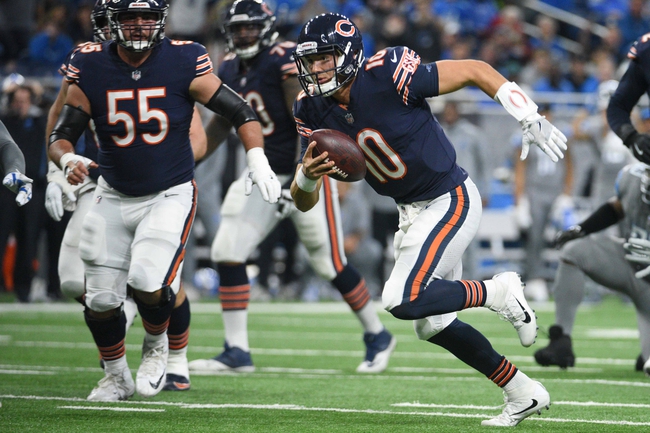 The Detroit Lions and the Chicago Bears meet in a week 10 NFC North division matchup from Soldier Field in NFL action on Sunday afternoon.

The Detroit Lions will look to rebound from back-to-back losses, including a 24-9 loss to the Minnesota Vikings in their last outing. Matt Stafford has thrown for 2,111 yards, 14 touchdowns and 6 interceptions on 67.8% passing while Kerry Johnson has rushed for 503 yards this year. Kenny Golladay leads the Lions with 33 grabs for 523 yards while Marvin Jones Jr. has 32 catches for 453 yards and 5 TDs. Defensively, Devon Kennard and Romeo Okwara each have 5 sacks while Jarrad Davis has logged a team-high 37 tackles this season. As a team, Detroit is averaging 352.9 yards of total offense and 22.5 points per game this season.

The Chicago Bears will look to keep their momentum going after a 41-9 beatdown of the Buffalo Bills in their last outing. Mitch Trubisky has thrown for 1,949 yards, 16 touchdowns and 7 interceptions on 64.2% passing while Jordan Howard has rushed for 439 yards and 5 touchdowns this season. Taylor Gabriel leads the Bears’ receiving corps with 37 grabs for 426 yards while Trey Burton has 371 receiving yards and 5 touchdowns. Defensively, Kyle Fuller has 4 interceptions and Khalil Mack leads the Bears with 5 sacks while Danny Trevathan leads Chicago with 41 tackles this season. As a team, Chicago is averaging 358.6 yards of total offense and 29.4 points per game this season.

Division games like this tend to be tight, but the problem is that the Lions are having issues scoring, and the offensive line is a disaster right now. Chicago is playing with some serious confidence right now, and while they’re wins over the Bills and the Jets, I simply have more trust all around for the Bears than I do Detroit, so I’ll lay the touchdown with the Bears here.