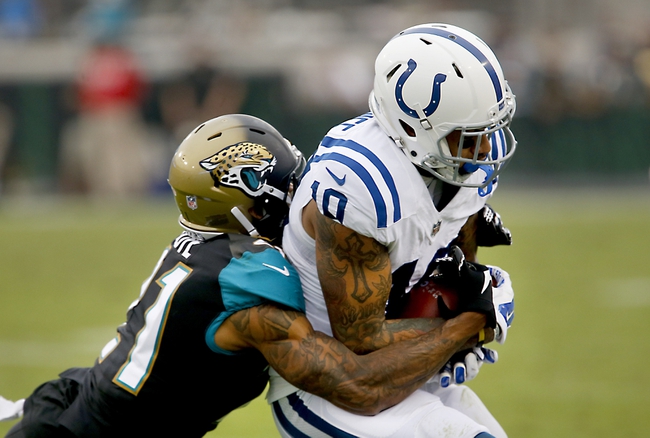 The Jacksonville Jaguars and the Indianapolis Colts meet in an AFC South division matchup in week 10 NFL action from Lucas Oil Stadium on Sunday afternoon.

The Jacksonville Jaguars will be out to snap a 4 game losing skid after falling to Philadelphia in their last outing by a final score of 24-18. Blake Bortles has thrown for 2,021 yards, 10 touchdowns and 8 interceptions on 60.3% passing while T.J. Yeldon leads the Jags in rushing with 334 rushing yards this season. Dede Westbrook leads Jacksonville’s receiving corps with 33 catches for a team-high 435 yards and 3 touchdowns while Donte Moncrief and Keelan Cole each have 29 catches for a combined 754 yards. Defensively, Yannick Ngakoue and Calais Campbell are tied for the team lead with 5 sacks each while Telvin Smith Sr. has 49 tackles on the year. As a team, Jacksonville is averaging 352.5 yards of total offense and 16.9 points per game this season. The Jaguars are also extremely stout defensively, sitting 2nd in the NFL in total yardage against, allowing just 313.2 yards per game and the fewest passing yards in the league with 190 per game against this season.

The Indianapolis Colts will be looking to build on back-to-back wins, including a 42-28 triumph over Oakland in their last outing. Andrew Luck has thrown for 2,187 yards, 23 touchdowns and 8 interceptions this season on 65.8% passing. Marlon Mack leads Indy in rushing with 381 yards and 3 touchdowns while Eric Ebron leads the Colts with 36 catches for 394 yards and 7 touchdowns and T.Y. Hilton has 26 grabs for 353 yards and 4 touchdowns. Defensively, Darius Leonard, Jabaal Sheard and Margus Hunt each lead Indy with 4 sacks while Darius Leonard has a team-high 58 tackles this season. As a team, Indianapolis is averaging 381.5 yards of total offense and 28.9 points per game this season.

If you told me that at the beginning of the year, in this matchup, that the two teams would both be sitting at 3-5 and Indianapolis would be favoured by a field goal given their head-to-head history, I’d call you crazy. However, Jacksonville’s tough defence from last season has been easy to break down lately, allowing 114 points over their last 4 games. Sure, Indy’s last two wins have come against Buffalo and Oakland who are a combined 3-14 SU this season, but the Colts have still scored 34 or more points in 4 of their last 5 games and are surprisingly easier to trust offensively that the Jags are on defense, so I’ll lay the field goal with Indianapolis here.