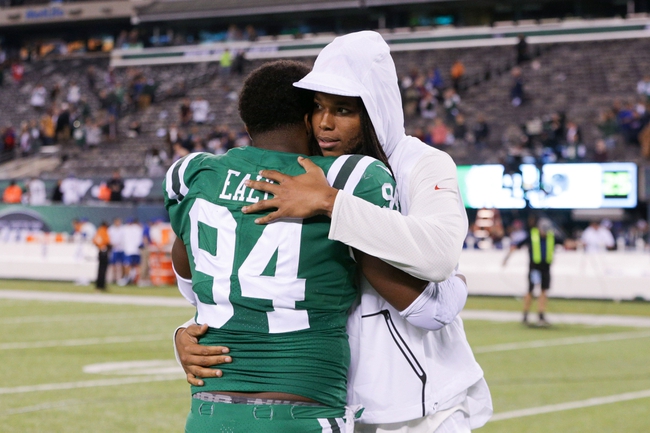 The Buffalo Bills could use a feel good victory here that would snap a four-game losing streak. The Buffalo Bills have lost three straight road games. Derek Anderson is completing 60 percent of his passes for 465 yards, zero touchdowns and four interceptions. Josh Allen and Anderson have combined for two touchdown passes and nine interceptions this season. Kelvin Benjamin and Zay Jones have combined for 601 receiving yards and two touchdowns while LeSean McCoy has 23 receptions. The Buffalo Bills ground game is averaging 97.2 yards per contest, and Chris Ivory leads the way with 280 yards and one touchdown. Defensively, Buffalo is allowing 26.8 points and 313.7 yards per game. Tremaine Edmunds leads the Buffalo Bills with 62 tackles, Jerry Hughes has 4.5 sacks and Jordan Poyer has two interceptions.

The New York Jets could also use a win here after losing six of their last eight games. The New York Jets have split their last four home games. Sam Darnold is completing 55 percent of his passes for 1,934 yards, 11 touchdowns and 14 interceptions. Darnold has two or more touchdown passes in three of his nine career games. Robby Anderson and Quincy Enunwa have combined for 673 receiving yards and four touchdowns while Chris Herndon has 16 receptions. The New York Jets ground game is averaging 110 yards per contest, and Isaiah Crowell leads the way with 533 yards and five touchdowns. Defensively, New York is allowing 23.7 points and 351.7 yards per game. Avery Williamson leads the New York Jets with 68 tackles, Jordan Jenkins has 4.5 sacks and Darron Lee has three interceptions.

The Buffalo Bills are simply a bad football team right now, and there's no other way to put it, as they've scored no more than 13 points in each of their last six games. The New York Jets aren't much better, and they've been held to 17 or less points in six of their last eight games. The Buffalo Bills have failed to cover six of their last eight games when an underdog of at least seven points. The New York Jets have covered seven of their last nine games when a favorite of at least seven points. However, the Jets haven't been this big of a favorite since 2015. The Bills are awful, and there's no way around it, but I'm not seeing any reason to lay over a full touchdown with the Jets. The Jets aren't some woldbeaters promised to beat up on anybody. I wouldn't touch this game, but if forced to pick, give me the points.