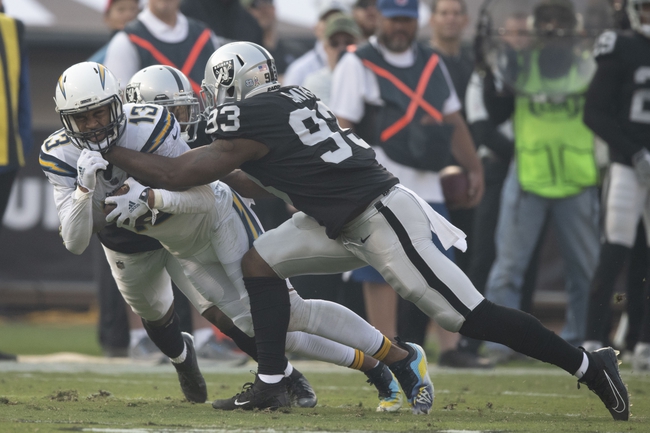 The Oakland Raiders and the Arizona Cardinals meet in week 11 NFL action from State Farm Stadium on Sunday afternoon.

The Oakland Raiders will be out to snap a 5 game losing streak after falling to 1-8 this season following a 20-6 loss to the Los Angeles Chargers in their last outing. Derek Carr has thrown for 2,441 yards, 10 touchdowns and 8 interceptions while Marshawn Lynch leads the Raiders with 376 rushing yards and Doug Martin has added 281 rushing yards this season. Jared Cook leads the Raiders with 546 receiving yards while Jalen Richard has a team-high 48 catches for 400 yards and Jordy Nelson has added 25 grabs for 353 yards. Defensively, Maurice Hurst Jr. leads Oakland with 3 sacks while Tahir Whitehead has a Raiders-high 46 tackles this season. As a team, Oakland is averaging 349.7 yards of total offense and 16.3 points per game this season.

The Arizona Cardinals could use a confidence building win of their own after sitting at 2-7 following a 26-14 loss to Kansas City in their last outing. Josh Rosen has thrown for 1,280 yards, 6 touchdowns and 8 interceptions on 55.8% passing while David Johnson has rushed for 492 yards and 6 touchdowns this season. Christian Kirk leads Arizona with 418 receiving yards, while Larry Fitzgerald leads Arizona’s receiving corps with 40 catches for 407 yards this season. Defensively, Chandler Jones leads Arizona with 8.5 sacks while Antoine Bethea has a team-high 62 tackles this season. As a team, Arizona is averaging 236.2 yards of total offense and 13.8 points per game this season.

Here you have a game of two of the most anemic offenses in the NFL this season, so the under may be worth a look. However, Arizona hung around a bit with Kansas City in what honestly probably should’ve been a blowout, while the Raiders just can’t get anything going this season. The Cardinals have actually covered in 3 of their 5 home games this year while Oakland is 0-4 SU and 1-3 ATS on the road, so I’ll lay the points with Arizona in this spot.

The pick in this article is the opinion of the writer, not a Sports Chat Place site consensus.
Previous Pick
NFL Power Rankings for the Week Starting November 15, 2018 (Before Week 11)
Next Pick
New Orleans Saints vs. Philadelphia Eagles - 11/18/18 NFL Pick, Odds, and Prediction